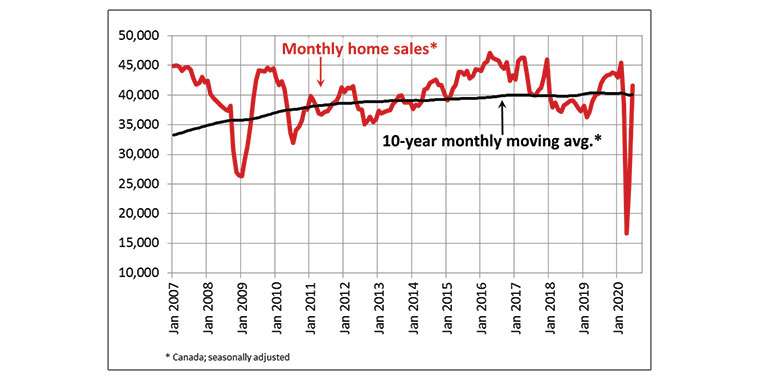 Many provinces are at various stages of reopening their economy — with some further ahead in that process than others. Manitoba just announced this week it will be entering Phase 4 of its reopening plans.

There is no question all markets are local, but in the case of the pandemic it certainly appears most major markets are in lockstep in seeing a v-shaped recovery to offset market sales losses due to the past few months of economic shutdowns.

According to the Canadian Real Estate Association (CREA) June market release, Winnipeg’s market region did not have the same explosive increase in sales over the previous month. Fraser Valley nearly doubled its May sales activity, for example. However, when you compare June 2020 to June 2019, our local market was up 18 % based on CREA’s breakdown of the Multiple Listing Service® (MLS®) residential numbers, three percentage points higher than the national average sales increase.

Home sales recorded over Canadian MLS® Systems in June 2020 rebounded by a further 63%, returning them to normal levels for the month — some 150% above where they were in April.

“REALTORS® across Canada are increasingly seeing business pick back up,” stated Costa Poulopoulos, Chair of CREA. “With sellers and buyers returning to the market, we continue to make sure clients stay safe by complying with government and health officials’ directives and advice, increasingly using technology to list and show properties virtually while providing secure methods to complete required forms and contracts. As always, but maybe now more than ever,
REALTORS® remain the best source for information and guidance when negotiating the sale or purchase of a home.”

“While June’s housing numbers were mostly back at normal levels, we are obviously not back to normal at thispoint,” said Shaun Cathcart, CREA’s Senior Economist. “I guess the bigger picture is one of cautious optimism. The market has recovered much faster than many would have thought, but what happens later this year remains a big question mark. That said, daily tracking suggests that July, at least, will be even stronger.”

The number of newly listed homes climbed by another 49.5% in June compared to May. As with sales activity, gains were recorded across the country.

One thing clearly evident when you look at CREA’s monthly home sales chart (above) is that Canada has experienced a v-shaped recovery.Winnipeg is a good example of that description as it almost drew even with last year for the first six months of MLS® sales activity. Looking ahead to July mid-month sales, the market is showing continued double-digit sales growth over the same period last year.

Other indices cited in CREA’s national market release — such as sales to new listings ratio and months of inventory — are reflective of what is happening in Winnipeg with a tightening housing market.

The residential sales to new listing ratio increased to 58.4% in June and left just three months of inventory going into July. Single family home conversions were that much higher with nearly 77% of new listings entered in June selling. Winnipeg is one of the Prairie markets where the MLS® Home Price Index has been rising, albeit at a modest 3% increase year-over-year.

Speaking of the Prairies, the Manitoba Real Estate Association (MREA) reported that Manitoba set an all-time monthly MLS® sales record of 2,015 sales in June worth $616.1 million in total dollar volume. The 7,123 residential sales in Manitoba over the first six months of 2020 represent 97% of total unit sales from the same period last year.

According to a survey conducted from June 2 to 11 by Probe Research on behalf of MREA and WinnipegREALTORS®, only one-in-ten Manitobans (11%) say they are now less likely to purchase a home because of Covid-19, with the vast majority (84%) saying the pandemic has no bearing on their homebuying intentions and a small number (4%) saying they are more likely to buy a home now.

“The record level of sales in June and the results of the Probe Research survey prove that Manitobans have confidence in the real estate market, and we are optimistic the strong sales activity will continue,” said Glen Tosh, President of MREA. “It would not have been possible without the success Manitoba has had to date in preventing the spread of Covid-19.”