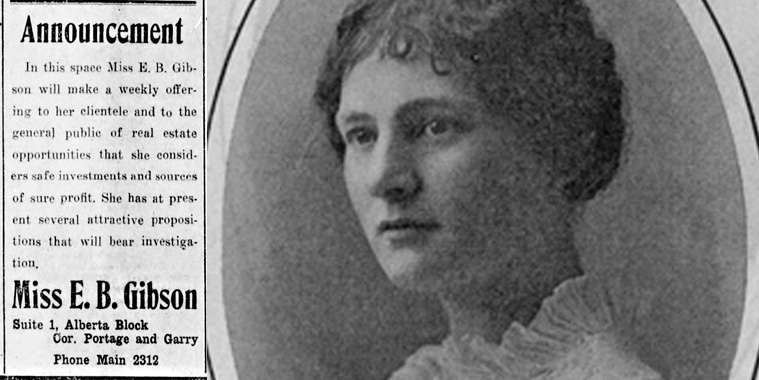 Winnipeg’s first female REALTOR® reached the top of her industry

Evelyn Bertie Gibson made her mark over a century ago as the city’s first full-time female REALTOR®. Despite her success, it would be another fifty years before women started joining the industry in great numbers.

Born in rural Manitoba in 1887, Gibson came to Winnipeg as a teen to attend teachers’ college. She soon found that teaching wasn’t her calling and went to work at the William Martel Photography Studio on Portage Avenue around 1906. Martel soon made her manager of his Winnipeg Amateur Photography Supply retail store.

In spring 1910, Gibson left Martel to open a real estate office. Asked years later what attracted her to the industry, Gibson replied, “I don’t know that there was any other reason except a certain lure, which I believe everybody here feels, to buy and sell land; and besides, I felt also that if I could successfully sell photographs, which most people consider a luxury, surely I could sell land, which many consider a necessity.”

It wasn’t long before Gibson closed her first big deal: the $40,000 sale of a downtown office block. The commission gave her the funds to put down payments on several smaller properties and sell them once they appreciated. In a couple of years, she even bought that same office block and ran it as a rental property.

Much of Gibson’s work involved selling homes, especially in her West End neighbourhood. She also sold farmland to Americans and overseas clients looking to settle in the West.

By 1914, Gibson was a high-profile REALTOR® with an office on the fourth floor of the Sterling Bank building on Portage Avenue. “Winnipeg has many women who are steadily climbing the ladder of success in many lines of work and among these we can truly point to Miss Gibson as one who has pretty well reached the top rung,” proclaimed the Winnipeg Tribune in a feature story that May.

When Gibson was asked by Macleans magazine in December 1914 about being the lone woman in her industry, she replied, “success in real estate is not due to the fact that you are a man or a woman, but to the goods you sell.”

On another occasion, though, Gibson did admit that her gender provided at least one advantage. “A man comes to me wanting to buy a house,” she told a reporter, “In almost every instance, he declares that it is his wife who must be satisfied. It is very easy for me to see his wife, get her views and fit the house to the woman.”

If Gibson faced discrimination from male colleagues, she didn’t publicly acknowledge it. She said of them, “They are the best on earth. Since beginning my career, they have shown me nothing but good fellowship and have assisted me in every way possible, willingly giving me information and advice whenever I asked for it.”

In 1917, Gibson partnered with Thomas Guinan who made his fortune enticing American farmers to relocate to Canada and financing property development in St. James. Semi-retired by this time, he and Gibson teamed up in an office on the eighth floor of the Sterling Bank building and sold a mix of rural land and city houses.

Gibson married Matthew Ryan in 1922 and she took time off to have a daughter. The family relocated to California in 1924.

Evelyn Bertie Gibson died in Los Angeles, California on August 25, 1940 after a brief illness. She was 53 years old.

Despite Gibson’s success, women did not follow her lead into the industry.

The late Myrtle Sutherland, a REALTOR® from the 1950s through 1980s, said that early in her career, she was usually the only woman at industry conferences. The tide was turning in the late 1960s thanks in part to her own work mentoring women who wanted to enter the field. By the time Eileen Lewis became the first female president of WinnipegREALTORS® in 1991, about 30 per cent of Winnipeg area REALTORS® were women.

The breakdown of gender in the industry today is not available, but current WinnipegREALTORS® president Catherine Schellenberg says, “I can tell you when I go to conferences, there are a lot of women in the business. It is great to see that.”

Schellenberg agrees with Gibson and Sutherland that gender isn’t a major barrier to entering the industry. “I think the challenges coming in are equal for men and women,” she says, adding that what prospective REALTORS® need to know that there is a steep learning curve ahead and that they are not going to make money right away. “Success is a long-term goal” she notes.

What attracts many to the industry, regardless of gender, is that there are no regular office hours or monthly sales quotas to meet. A REALTOR® can set the pace of growth of their business and adjust it over time. “If you sell one house a month and that suits you, that’s great,” Schellenberg says, “you may not be as busy when your kids are younger, but as they get older you can get more involved in the business.”

Another comment of Gibson’s from more than a century ago that resonates with Schellenberg is about the fellowship REALTORS® show to those starting out in the field. “That hasn’t changed at all,” she says, “REALTORS® are willing to share that knowledge with new people coming into the industry…. To gain all this knowledge and not share it is a shame.”