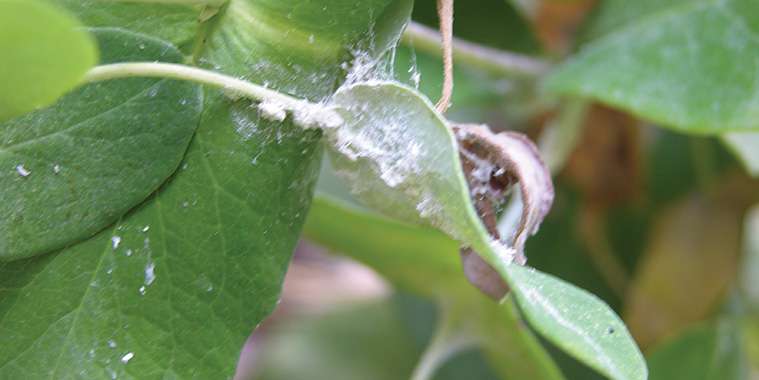 House plant pests are troublesome at this time of year

This is the time of year houseplant pests begin to make their appearance. There has been little sun for a good eight weeks now, and plants are generally stressed from lack of enough light, not to mention the dry air of most homes. The plants simply can’t cope with all this and at the same time muster the strength to ward off infestations.

Unless you have an awful lot of them, fungus gnats don’t pose much threat to healthy, mature houseplants, but they are a nuisance in the home. They are attracted to the carbon dioxide in breath, which is why they will often buzz around your face and nose. The larvae live in the soil feeding mostly on fungus, although they will also go after small rootlets and tender seedlings. Fungus gnats thrive in soggy soil.  Adjust the watering schedule and allow the top one inch of soil to dry out to before watering.

A drench of one part three percent household hydrogen peroxide to four parts water should do away with the larvae. Soak the soil untill it runs out the bottom of the pot. Repeat at weekly intervals until all the eggs have hatched. To check for larval activity, put a cut piece of potato on the soil overnight. It will draw the larvae to the surface. You can capture the adults with a Vaseline-smeared yellow Post-it note.

Spider mites are mites, not spiders. Zoologically speaking, both are arachnids, but spiders feed on insects and these mites feed on the juices in your plants.

An early sign of spider mites is speckled leaves or dead patches and, if you look very closely, you may be able to see the tiny red mites. Badly infested plants may exhibit a coating of sticky webs at leaf junctions and between leaves. The mites spin these as a protective covering for their eggs.

Spider mites do not care for a moist environment. Try misting the leaves with water to prevent spider mite invasion. If you already have spider mites, you can spray insecticidal soap on the plant at 10-day intervals making sure you get to all parts of the foliage.

Because this will only kill adults, not eggs, you have to repeat. This is best accomplished in the shower. Leave the sprayed plant in the shower for about an hour and then rinse in tepid water. The optional but optimal finishing step is to wipe the plant with a soft, damp cloth.

Scales become noticeable as hard “scabs” on a plant. In fact, that scab is a waxy covering protecting the adult female of a plant-sucking insect commonly called scale. She is immobile in her waxy house. Only the juveniles crawl. The male adults have wings and can fly.

Because of the waxy coating, the damaging adult females are particularly difficult to target. Horticultural oils may suffocate the insect under the shell. Some people spray a 70 per cent rubbing alcohol to attack the adult females. But be careful. Certain plants are sensitive to this.

Low populations of scales can be picked off by hand, wiped off with an insecticidal soap or a neem-based product, or touched with an alcohol-soaked cotton swab. The adult males are harmless to the plant; they live only about two days and do not feed.

If it is a bad infestation, consider tossing the plant before your other plants become infected.

Mealybugs are also scale insects. Most of them retain their legs and can move, though they tend to attach to a plant, sucking the juices and going nowhere. They secrete a powdery wax all over their bodies that makes them look kind of like a bit of cotton. This coating protects them and their eggs.

Treatment is the same as for scales.

You know you have whiteflies if your plant is rapidly dying and, when you give it a shake, a cloud of tiny flying insects appears.

These are enormously destructive insects that attack a plant the way most of the pests do: they pierce the outer tissue and suck out the juices. Their saliva is toxic and they occur in massive numbers. They excrete honeydew (like aphids) that promotes mould growth.

Whiteflies are difficult to control because they are extremely adept at developing resistance to insecticides. Spray the plant thoroughly with insecticidal soap, and then give it another spraying with neem oil. It is available raw on the Internet.

How do you get these insects?

House plant infestations are generally delivered in new plants brought into your home. Examine any potential purchase carefully before buying it. Quarantine the plant for a week or two to be sure there is nothing moving on it. An infested plant can be the death knell for mature tropicals that you may have grown for years or that may have a sentimental value to you.

Dorothy Dobbie is the owner of Manitoba Gardener magazine.