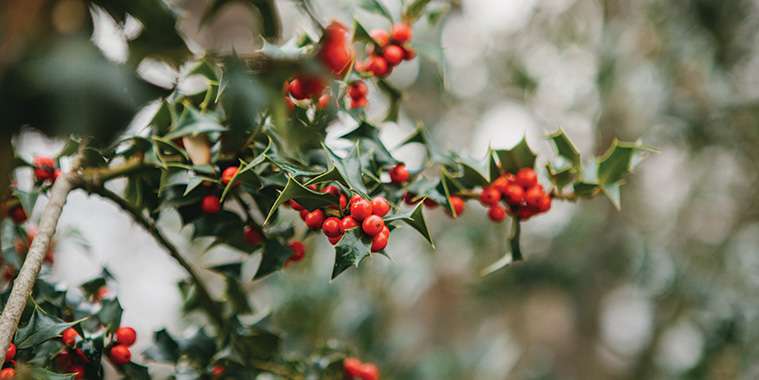 Mistletoe and holly still in vogue for Christmas

All sorts of plants, especially the evergreen ones, are associated with Christmas. While the tradition of honouring ivy (it was once thought that steeping an ivy leaf in water would ward off hangovers) has not followed holly and mistletoes to North America, holly and mistletoe are still very much in vogue.

Holly (Ilex aquifolium) was sacred to the Druids, symbolizing fertility and eternal life. The Romans used it to celebrate Saturnalia as it was associated with Saturn, the god of agriculture and the harvest.

Mistletoe (Viscum album) was seen in pre-Christian Europe as the symbol of maleness. The berries became attached to fertility and virility, becoming the symbol of romance. The Druids considered mistletoe sacred only when it was cut from oaks with a golden knife. Maybe this was because mistletoe rarely attaches itself to oaks.

In Norse mythology, Baldur, the god of peace, was slain by an arrow made of mistletoe. He was brought back to life by his fellow gods and mistletoe became sacred to Freya, goddess of love, who decreed that whosoever should pass under it would receive a kiss to show that the plant had ceased to be a symbol of hate. Romans signed peace pacts under mistletoe. Each time a kiss is planted, a berry should be plucked. When all the berries are gone, the kissing stops.

The Latin word viscum means sticky. Mistletoe berries contain a mucilaginous substance that is very adhesive. When a bird tries to eat the berries, which are high in protein, the juice gets stuck on their bills. They try to rub it off on the nearest branch, where the seed adheres then puts down its roots which send out fibers to penetrate the wood, seeking out the nutrients from the arteries of the tree, upon which the mistletoe lives.

Chewed mistletoe berries and boiled holly bark were both used as “birdlime” to catch birds. Rolled into thin sticky strands, the sticky stuff was wound around a perching branch. Perching birds would stick to the treated branch and become easy to capture.

Both mistletoe and holly are evergreen. Mistletoe parasitizes trees such as apples, ash and hawthorn where it forms great, green, leafy balls. It seldom kills its host unless the tree is sickly to begin with.

Holly grows in sunny locations and can bear both prickly and smooth leaves. Scientists today postulate the trees grow prickles in response to herbivore activity. The lower leaves will have spines while the upper leaves remain smooth. Some holly species are of different sexes, in which case only the fertilized female produces berries. However, there are monoecious varieties that have both male and female flowers and can therefore fertilize themselves. Not that it matters here in Manitoba because it is much too cold for this zone 5 plant. Still, I know there are some courageous gardeners who might want to try over wintering a plant.

There are North American versions of both holly and mistletoe. One of the North American hollies that are monoecious is Croonenberg. While in its own land, it grows 15 to 60 feet. Eastern Canada grows a variety commonly called winterberry (Ilex verticillata) that is shrubby, growing as tall as 12 to 16 feet. It is not prickly. Birds love the berries.

While mistletoe does grow in Manitoba, it is not a plant you want to see in your trees, causing witches’ boom on conifers and eventually killing the tree. Mistletoe is the favourite food spome birds, but people can become very ill from eating mistletoe berries and leaves. They cause stomach cramps and diarrhea. Having said that, both native Americans and Europeans used mistletoe berries for medicinal purposes, the Europeans to treat circularity and respiratory problems. Holly was used for toothache, measles and dog bite!

The term mistletoe is said to derive from the Old English words for “mistal” meaning dung, and “tan” meaning twig, so “dung on a twig”. What a place for romance!

Dorothy Dobbie is the publisher of Manitoba Gardener Magazine. Subscriptions, both digital and print, can be obtained at localgardener.net or by calling 204-940-2700.