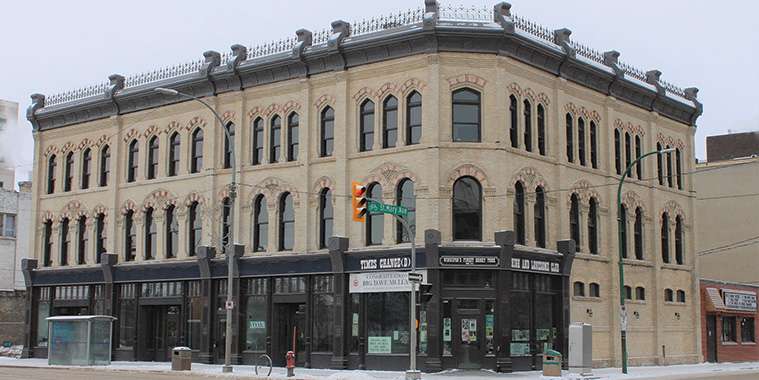 Back to the 1880s: the restored Fortune Block

In early 2016, two of Winnipeg’s oldest buildings were at risk of demolition, until local businessman John Pollard stepped in and purchased them. His subsequent restoration of the Fortune and Macdonald blocks into a single, modern office building took two and a half years and the outcome has been remarkable.

The most recognizable of the buildings is the Fortune Block at 230 Main Street and St. Mary Avenue, the long-time home of Times Change(d) High & Lonesome Club. The three-storey, mixed-use building with retail below and offices above was constructed in 1882 for developer Mark Fortune who is likely best remembered for having gone down with the R.M.S. Titanic in April 1912.

Fortune sold the building just as construction was wrapping up to Alexander “Sandy” MacDonald who was seeking new warehouse space for his fledgling grocery wholesale business known today as MacDonald’s Consolidated. Rather than reconfigure the Fortune Block for his own use, MacDonald had a nearly identical three-storey building constructed to the south of it. His MacDonald Block gave the appearance that the two structures were one building.

MacDonald eventually moved on to larger premises and in 1903 the MacDonald Block was converted into the Commercial Hotel. It remained a single room occupancy residential block until the 2010s.

The façades of both buildings have been transformed back to the 1880s using period photographs and clues found by craftsman who worked on its exterior. The brickwork was cleaned, damaged bricks were recreated and replaced, and long-gone features such as the metal cornice and iron parapet were custom-made to replicate the originals.

“We always knew from the outset of the project that we were about to do a very detailed restoration”, says Ryan Pollard, project manager of the restoration. When asked if they considered “cheating” on some of the details to save time or money, he replied, “They’re very important architectural features of the building and its those little details that really make it special, so we wanted to make sure we were paying attention to that. It goes back to trying to keep the restoration as true to the original as possible.”

Inside, each building received a very different treatment to bring them back to their original interiors.

The Fortune Block’s original floorplan of offices and hallways was intact. Details such as the central staircase, a skylight opening, and even original office doors were still in place and that took a lot of guesswork out of the restoration.

The MacDonald Block had the opposite issue thanks to countless renovations and repairs carried out during its time as a residential hotel. “It became obvious fairly quickly that the internal structure was badly compromised from years and years of terrible renovations”, says Pollard. He adds that as a result of this work anything of historical or architectural significance had been stripped out. The solution was to gut the upper floors to create two expansive open spaces which brought the building back to its origins as a grocer’s warehouse.

Doing work on any old building will yield surprises and the Fortune and MacDonald blocks were no different.

One pleasant discovery was a pass through in the partition wall connecting the two buildings on the second floor. It existed during MacDonald’s time and was likely sealed up when the MacDonald Block became a hotel. Pollard explains that it was a stroke of luck, “In our drawings we had an opening drawn in exactly there, almost to the inch of where we found the original opening…. Because we were focussed on keeping the restoration as true to the original as possible, it was a very nice surprise.”

The work wasn’t all restoration. New features were added, such as a common entrance to serve both buildings, an elevator and a rooftop patio. All systems, including HVAC, electrical and plumbing, were replaced as were the 54 or so eight-foot-tall upper storey windows.

Today’s Fortune Block, both buildings have assumed the one name, contains eighteen offices that range in size from 211 to 531 square feet, most of which are connected by a lockable pass through door that allows for a tenant to lease multiple offices and access them without entering the common hallway.  There are also the two open spaces of 3,400 square feet each that will be developed to suit their tenants and four street-level retail units.

The building is now about 40% leased. Pollard says the feedback he gets from tenants is positive, “They seem very happy to come and work in this old building. They seem to appreciate the work that was done, which is nice.” He also notes that thanks to the building’s numerous common spaces there is a sense of community being created within the building.

Pollard feels positive about the prospects for south Main Street with the Canadian Museum for Human Rights, the 300 Main apartment tower at Portage and Main now under construction and the proposed Railside condominium development at The Forks. He says, “It was an underused, underdeveloped part of the downtown, so we’re very happy to see all the development happening around us…”

For a 3-D tour of the restored building visit the Colliers website at www.collierscanada.com and search “Fortune Block”.