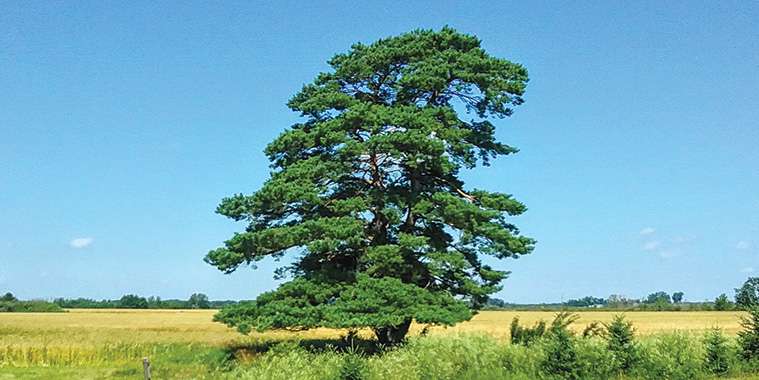 Here’s to the pine tree

When we talk pine trees in Manitoba, we think mainly of the exotic species instead of our own ubiquitous Jack pine which grows pretty much right across the province. It chooses rocky, unfriendly places to set down its roots and also dry sandy places — places where many other trees refuse to grow.

And once they set up shop, Jack pines grow to a ripe old age, some as long as 200 years, although most only make to about 150. They reach maturity at 80. It is one of those wonderful species that requires great heat to open its cones. The resin that seals these cones starts melting at temperatures of  50°C  and can take  heat as high as 482°C for a few seconds — even higher for an instant.

Jack pine forests often have trees that are all about the same size, making the forest look as if it was artificially planted. This is because the trees may have regenerated after a forest fire and are therefore all the same age. They also refuse to grow in shade so seedlings thrive only where they get the most sunlight, their lower branches falling away as they grow toward the light. Their bare lower trunks further make the forest seem artificial.

These trees don’t do well in the city, although they are salt spray tolerant and grow slowly with shallow roots, but if you have a cottage, they may be just the thing for a rocky backyard or a sandy lot.

Pine trees in general are wonderful trees and are the most abundant and common of all conifers worldwide. The tallest of these is a sugar pine in Oregon, topping out at 273.79 feet. An Eastern White pine, the tallest tree in Eastern Canada, typically tops out at 150 feet.  The oldest pine, and the one that generally grows the longest, is a bristlecone pine. There is one in California that is said to be over 5,000 years old.

Pines are great for attracting birds. In addition to the pine siskin, a little nomadic bird, the tree attracts crossbills, chickadees, pileated woodpeckers and many other seed-eating birds.

Pine cones are the largest cones produced by conifers. They hang from the branches rather than stand upright. The male cones are produced first, appearing in clusters at the tips of branches in the lower part of the tree. That is because their pollen is carried upward by the wind to pollinate the female cones in the upper branches. The male cone is soft and green or greenish, perhaps yellowish or even reddish, falling as soon as it sheds it pollen. Male cones are smaller than female cones.

Pines send out their needles in clusters or bundles of two, three, or five, depending on the species. These clusters are called fascicles and the number of needles in a fascicle is often used to identify the species. Eastern White pine needles usually occur in bundles of five (sometimes one or two needles will fall out of the bundle). Ponderosa pine produces bundles of three needles. The Jack pine, Red pine and Norway pine all produce two needles per bundle. Pine needles are attractive as food to some butterflies and moths.

Pine trees have had many meanings to many people but for some First Nations in North America, the Eastern White pine was the tree of peace and war weapons were buried among its roots that. The five-needled fascicle of this species represented the five nations of the Haudenosaunee confederacy. These First Nations also burned the wood of the white pine to pacify ghosts and banish nightmares. In the Far East in Japan, China and Korea, pine is the tree of longevity, virtue and youth. It also symbolizes masculinity and power.

Pine resins and tar have been used medically. Dried bark or pine needle tea provides a high amount of vitamin C, A and carotenoids. The tea has been used as an expectorant to treat colds. The pine has many natural antiseptic properties and has been used to make disinfectants and cleaning products such as Pinesol. Pine resin is the source of turpentine. In Greece, pine resin is added to a white wine (retsina).

If you are looking to plant a pine tree in your garden, you might want to choose a Ponderosa or Yellow pine which will eventually reach 80 feet, or the smaller mugho pine that can be pruned to keep it to a manageable size. Scotch pine has a nice rounded shape and lovely orange bark. It reaches a modest 35 feet.

Dorothy Dobbie is the publisher of Manitoba Gardener magazine, 204-940-2700. LocalGardener.net