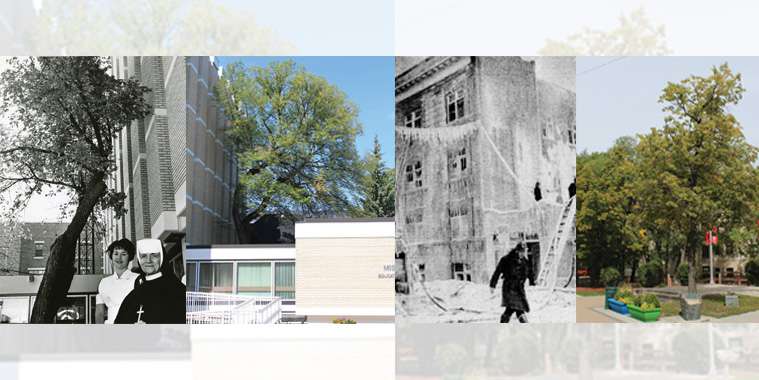 The stories that Winnipeg’s trees can tell

Like buildings, trees can tell us a lot about the history of a neighbourhood. They are, of course, much harder to research as they were not included in annual street directories, ceremonial trees are forgotten about when plaques disappear, and the back story of ones planted on private property are lost when owners move on.

Trees Winnipeg is preserving the stories of notable trees across the province through their Manitoba Heritage Tree program, a partnership with Manitoba Sustainable Development and the Manitoba Forestry Association. Individuals can nominate a tree based on its importance to a community, historical significance, exceptional size, or rarity. All trees, even those that don’t receive heritage tree status, are added to the online Manitoba Tree Register.

For more about the Heritage Tree program, or to check out the register, visit: www.treeeswinnipeg.org.

As one of this week’s feature neighbourhoods is West Winnipeg, here are two West End trees with a great story to tell.

You won’t notice this tree at first as it is partially hidden by the walls of Misericordia Hospital’s former nurses’ residence.

When ground was broken for this building in 1961 there were six trees on the site that were removed one by one to make way for construction. When it came to the last tree, a giant elm in the centre of the lot, Sister St. Odilon Belanger put her foot down.

The Quebec-born nun had been the hospital’s
director of nursing since 1952. Though the new facility would benefit her nurses greatly, she had misgivings about the loss of the trees. Her concerns were ignored by the hospital’s administration.

Inspired by those who fought to save the Wolseley Elm in the late 1950s, Sister St. Odilon decided to take tree’s plight to the media. She told the Winnipeg Tribune: “It hurts me to see a tree come down. To me, a tree is a symbol of life. I think I’d cry if they took that one down.”

The hospital and nun struck a deal that the tree’s fate would hinge on the results of an arborist’s examination. When he concluded that it was healthy enough to survive construction and should live long into the future, the hospital had the architect’s drawings altered to allow for a small courtyard between the residential tower and the assembly hall building. It is just large enough for the tree with a few meters on each side to allow water to reach its roots.

Sister St. Odilon left Winnipeg 1966, but returned in 1975 for a nursing school reunion. A Tribune reporter caught up with her and asked about the campaign to save the tree. She replied: “I was very happy to see (the tree). I have no regrets, but it took a lot of work.”

The tree will be removed later this year when the building is demolished to make way for the ten-storey Misericordia Assisted Living Centre. The hospital is looking at having wood from the existing tree turned into a piece of art or furniture. They have also hired an arborist to make a clone from one of its branches so that a new generation of Sister St. Odilon’s tree will live on in the new building’s garden.

In tiny Saigon Park, located across the street from the Ellice Avenue entrance of the University of Winnipeg, stands a 43-year-old basswood tree dedicated to the victims of the second deadliest fire in Winnipeg’s history.

The Haslemere Apartments was a 28-unit, three-storey walk-up built around 1912. It was located a couple of blocks west of the park on Ellice Avenue at Furby Street.

At around 1:00 a.m. on January 18, 1974, a passing motorist saw smoke coming from the building and called the fire department. He told a reporter: “By the time I got back, everything and everybody was in hysteria. Some people were still yelling from the windows and some people were jumping.”

It took firefighters five hours to put out the blaze. They then found seven bodies in the wreckage. Two of the 22 injured that morning later died which brought the death toll to nine.

The tragedy shook Winnipeg and caused the city to act. Prior to this fire, residential buildings constructed before the modern fire code was introduced did not have to conform to it. As a result, the Haslemere and likely hundreds of other residential buildings had no sprinklers, fire alarms or even smoke detectors.

The city battled building owners who did not want new regulations and eventually passed a bylaw ensuring that all residential buildings, regardless of when they were built, had to meet at least basic fire code requirements. The move undoubtedly saved dozens of lives in the decades that followed.

In September 1975, the brother of fire victim Doris Janecke donated $350 to the city and asked that a tree be planted in this park. The following year, this basswood was planted and is accompanied by a large stone bearing a plaque that names all nine victims.