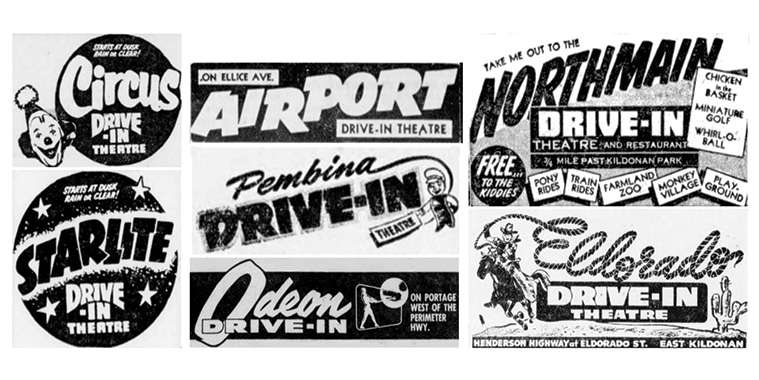 A history of Winnipeg’s drive-in theatres

Today, there are just two options left for drive-in theatre fans in Manitoba: the Big Island Drive-In near Flin Flon and the Stardust Drive-In at Morden. It’s a far cry from 65 years ago when there were six drive-ins operating at one time in the Winnipeg area alone!

Manitoba’s drive-in theatre era began on July 19, 1949, when Fort Garry mayor Raymond Fennell cut the ribbon to open the Pembina Drive-In on Pembina Highway near present-day Bishop Grandin Boulevard. The $150,000 project was financed by Winnipeg-based Western Theatres Ltd. which was Western Canada’s largest theatre chain at the time with 25 screens in Manitoba alone.

Western Theatres hired architects Liebenberg and Kaplan of Minneapolis to design the project. It was a basic affair with a 75-foot tall tower to hold the 54 x 36-foot screen and a single-storey building containing a concession stand and projection room.

The Pembina had a capacity of 575 cars and charged 25 cents per child and 60 cents per adult. The sold-out opening night featured a cartoon, newsreel and the John Wayne film Red River.

Winnipeg’s next drive-in was also by Western Theatres, but it wasn’t planned that way. Construction began in early 1950 on East Kildonan’s Eldorado Drive-In on a 12-acre site off Henderson Highway, now the shopping complex anchored by Sobeys. Work on the site had barely started when the developer sold out to Western.

The Eldorado cost $170,000 to construct and included a 66 x 64-foot screen and a single-storey building for its concessions and projection room. Its 720 stalls were laid out in a fan shape facing the screen and cars parked on gravel pads that were angled slightly upwards. The Eldorado opened on June 29, 1950, claiming to be “Canada’s Largest Drive-In,” with the film Tulsa starring Susan Hayward.

Another theatre that opened in 1950 was the Northmain Drive-In on Main Street at Red River Boulevard. It was financed by developer Max Shnier and designed by Patricia Kettner of the architectural firm Green Blankstein Russell (GBR).

The 700-car Northmain had an eclectic mix of amenities. There was a two-storey building with a concession stand and projection room on the main floor and an indoor restaurant and viewing lounge on the second. It also featured a professionally designed mini-golf course, children’s playground, mini-train, petting zoo and pony rides. It even had a monkey house.

Western Theatre’s Airport Drive-In (later renamed the Airliner) on Ellice Avenue at Madison Street joined the lineup in 1952, and the following year saw a pair of independently owned theatres, the Starlite Drive-In at 1300 Regent Avenue and the Circus Drive-In on Portage Avenue at Muriel Street, open.

By the summer of 1953, Winnipeg had reached “peak drive-in” with six theatres fighting for customers and things soon got ugly.

In July 1956, the manager of the Circus alleged that Western Theatres was blocking independent owners from getting first-run films and in retaliation would charge no admission for the summer in an attempt to lure customers away from the chain. (He said the Circus could break even just from its concession stand revenue.) Western angrily denied the claim and in mid-August countered by offering free admission to patrons who arrived at any of their three drive-ins by 8:45 p.m..

The owner of the independent Starlite lashed out at both Circus and Western, calling the free admissions “a disgraceful measure” that would kill off smaller theatres. The management of the Starlite and the Northmain, Winnipeg’s other independent theatres, said they would not get involved in the price war.

The oversupply of drive-in theatres, and the rapid development of Winnipeg’s suburbs that made drive-in land much more valuable as residential lots, led to the closure of the Eldorado and Circus by the end of the 1950s.

The last drive-in theatre to open in Winnipeg was the Odeon Drive-in in 1963. Financed by the Odeon-Morton theatre chain, the $500,000 facility was designed by Libling Michener and Associates and constructed on Portage Avenue adjacent to Assiniboia Downs.

The Odeon had space for over 1,000 cars including a 300-car runoff area to keep traffic from lining up on the highway. The 6,600 square foot concession building featured a 90-foot-long counter to ensure speedy service, and its enormous tower held a screen that measured 105 x 45-feet.

The unique feature about the Odeon was that it billed itself as a year-round theatre. Sidewalks around the concession area were heated and patrons could use 1,500-watt electric heaters to warm their cars without having to run the engine.

Opening night was September 20, 1963, and featured the Doris Day/James Garner film The Thrill of it All. As promised, the Odeon stayed open all winter long.

One by one the Odeon’s competitors disappeared. The Pembina was expropriated in December 1975, to make way for the Pembina–Bishop Grandin traffic interchange. The Airliner closed on May 29, 1977, the Northmain showed its last film in 1980 and the Starlite went dark in 1984.

Attendance at the Odeon Drive-In steadily declined and in 2004 Cineplex-Odeon announced its closure, though a temporary reprieve was granted after an online petition garnered over 10,000 signatures. The theatre closed for the season in September 2007 and the following spring it was announced that it would not re-open for 2008.