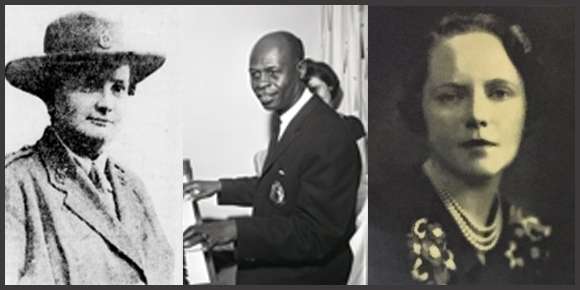 Why I love Winnipeg — its people

I have been blogging about local history for more than a decade and my favourite thing is discovering interesting people from the city’s the past. Those who interest me most are not found in history books or have anything named after them. They were just regular folks who did interesting and sometimes ground-breaking things as part of their everyday life.

Here are just a handful of those people who make Winnipeg what it is today.

Dr. M. Ellen Douglas established her medical practice in 1908 on Sherbrook Street near the Misericordia Hospital. She specialized in obstetrics and diseases of women and children.

During World War I, Douglass put her medical career on hold because she felt it was important that women were as prepared to go to the front lines as men, if necessary. She created the Women’s Rifle Club that taught members to shoot, conduct security patrols and perform crowd control.

Douglass then founded the Winnipeg Women’s Volunteer Reserve that visited military camps, trained like other military units and even marched alongside men in some military parades. The reserve had as many as 600 members at its peak.

Douglass did go overseas during the war, not with her reserve but with St. John’s Ambulance. She eventually joined the Royal Army Medical Corps as a medical officer and attained the rank of major.

After the war, Douglass continued her medical practice and dedicated much of her life to improving women’s health and fighting for better services for disabled children. She died in 1950.

Percy Haynes was best known as proprietor of Haynes’ Chicken Shack on Lulu Street. It became a musical hotspot where the likes of Harry Belafonte and Oscar Peterson would visit when in town to jam late into the night.

Haynes first made headlines as an athlete. He was a member of the 1932 Winnipeg Stellars basketball team that won the Canadian amateur championship and was the city’s amateur welterweight boxing champion in 1933 and 1934.

During World War II, Haynes tried to enlist in the Navy but was told that Blacks could not join. After his letter writing campaign to officials in Ottawa, the rules were changed and Haynes became the first Black person in the Royal Canadian Navy.

After the war, Haynes concentrated on his music career and became a fixture as a pianist in local clubs. It was here that he met his wife, Zena, a singer, and the two started their restaurant in an extension to their house in 1952.

Katharine Middleton was the Winnipeg Tribune’s Home Economics editor from 1935 to 1948 and wrote more than 4,000 installments of her “A Page for Winnipeg Homes” column.

Middleton navigated homemakers through World War II when many were under tremendous pressure juggling a job outside the home, raising a family as a single parent and providing meals under strict food rations. Her weekly menu of nutritious dishes that took into account that week’s ration card became a staple in homes and stores and got her noticed at the national level.

Middleton also used her column and speaking engagements to speak out on issues that are familiar today: a “100-mile diet”; an end to food waste; and food security for all. Middleton was chosen as Southam News’ correspondent at the 1945 United Nations summit that led to the creation of the Food and Agriculture Organization (FAO).

In 1948, Middleton left for Chicago to work as a magazine and cook book editor and for a time had her own daytime television show. She died in 1987.

Joe Keeper of the Norway House First Nation is one of the best distance runners Canada has ever produced.

Educated in Brandon, Keeper’s high school coach noticed his aptitude for running long distances and encouraged him to go to Winnipeg to seek out more advanced training.

In 1910, Keeper joined Winnipeg’s North End Amateur Athletic Club and the following year set the Canadian ten-mile outdoor record. He was selected for Canada’s 1912 Olympic team and finished fourth in the men’s 10,000-metre race. No Canadian has equaled that place since.

Keeper enlisted in the army in 1916 and served as a runner couriering messages back and forth along the front lines. It was one of the most dangerous jobs on the battlefield and it earned him the Military Medal for bravery in 1918.

Soon after the war, Keeper returned to Norway House where he raised a family and had a 30-year career with the Hudson’s Bay Company. He died at Deer Lodge Hospital in 1971 and is buried in the military section of Winnipeg’s Brookside Cemetery.

Cecil Frances Lloyd lived in a tiny house on Victor Street in the city’s West End. After his wife died in 1926, he immersed himself in writing poetry and by the end of the decade his poems had appeared in several national magazines and he had self-published a few volumes of his work.

The Depression put plans for new books on hold and after losing his job as a bookkeeper Lloyd became a recluse, rarely leaving his home.

In 1935, Lloyd’s big break came when Ryerson Press of Toronto approached him about publishing his collected works. Landfall: The Collected Poems of C F Lloyd became a critical success and some wondered if it would usher in a new wave of modern prairie poetry.

Sadly, despair over losing his wife, job, and eventually his home, was too much for Lloyd. He took his own life in 1938 at the age of 55.

More than a decade after his death, one national writer referred to Lloyd’s suicide as: “one of the most poignant incidents in Canadian literary history.”