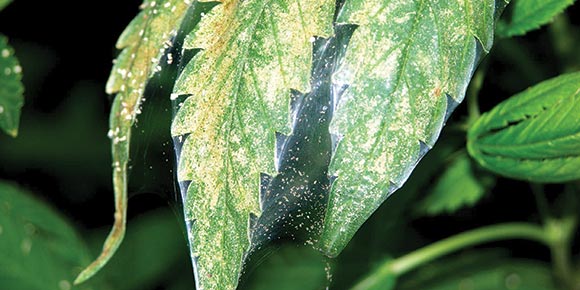 By this time of year, you may be noticing a few strangers hanging out in your houseplants. After a few months of low light, inconsistent watering and overheating, plants have little resistance to insects that may have been harbouring in the plant soil or may even have hitch-hiked a ride on the lovely poinsettia Aunt Margaret brought with her for dinner.

There are several very common pests, and if you catch them early enough, many are manageable.

Fungus gnats, don’t pose much threat to healthy, mature houseplants, but they are a nuisance, flying up your nose in search of carbon dioxide. The adults are grey-black, about 1/8 of an inch long, shaped like a mosquito. Their larvae live in the tip one to two inches of soil feeding mostly on the fungus that grows on decaying plant matter, though heavy infestations will also go after small rootlets and tender seedlings. Mix one part hydrogen peroxide to four parts water and drench the soil to kill larvae. Set out a dish of cider vinegar to capture flying adults.

Fungus gnats indicate that a plant is too wet. Adjust your watering, letting the soil dry out between waterings to discourage their return.

Don’t mistake fungus gnats for fruit flies that colonize fruit baskets feeding on fermenting fruit material. They often enter on the skins of bananas. Fruit flies are light yellow to tan with a bright red eye. They are fly-shaped and about a third of the size of housefly.

Spider mites are mites, not spiders, although both are arachnids, but spiders feed on insects and these mites feed on plant juices.

An early sign of spider mites can be dead patches on plant foliage. Look very closely at the underside of the leaves and you may be able to see the tiny red mites. A coating of sticky webs is a sign of a well-advanced infestation of spider mites. They spin little silk cocoons as a protective covering for their eggs.

Spider mites like a dry environment. Misting plant leaves with water may help prevent them. If you already have spider mites, prune off any badly infected parts. Wipe the plant down with wet soapy paper towel or soft cloth, and/or spray with insecticidal soap at 10-day intervals. Since this will kill only adults, not eggs, repeat the applications to get new adults who were eggs the previous time you sprayed, making sure to get all parts of the foliage. Leave for about an hour and then rinse the plant in tepid water. Mist frequently if your house is dry.

Scales, another sucking insect, become most noticeable as hard scabs on a plant. In fact, that scab is a waxy covering an adult female. The adult female is immobile in her waxy house. The juveniles crawl, and the male adults have wings and can fly.

Because of the waxy coating, the damaging adult females are particularly difficult to target. Some horticultural oils may suffocate the insect under the shell. These insects are best controlled at the juvenile stage with soaps, wiping the stems and leaves of the plant. The adult males are harmless to the plant; they live only about two days and do not feed.

Mealy bugs are also scale insects, but the adult females do not encase themselves in a shell. Most of them retain their legs and can move, though they tend to attach to a plant, sucking the juices and going nowhere. The females secrete a powdery wax all over their bodies that looks like little bits of cotton stuck at the axils of plants.

Washing and wiping periodically is again the best method of eradication.

You know you have whiteflies if your plant is rapidly dying and, when you give it a shake, a cloud of tiny flying insects appears. These are enormously destructive insects that attack a plant the way most of the pests do: they pierce the outer tissue and suck out the juices. Whiteflies are particularly effective at killing a plant for several reasons: their saliva is toxic, they occur in massive numbers, and they excrete honeydew (like aphids) that promotes mould growth.

These are difficult to control because they are extremely adept at developing resistance to insecticides. My best advice is to get rid of the plant.

Dorothy Dobbie is the owner of Manitoba Gardner magazine. To subscribe, call 204-940-2700 or go to localgardener.net.