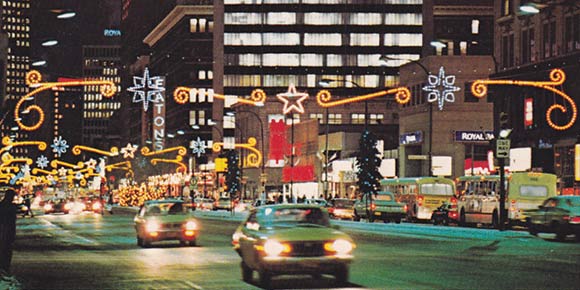 For generations of Winnipeggers, the true feeling that Christmas was around the corner came during a visit downtown to experience the bustle of the streets, department store window displays and, of course, the Christmas lights. Though shopping habits may have changed, there are two traditions — the civic Christmas tree and downtown decorations — that still shine bright.

The lighting of a civic Christmas tree is a tradition that dates back to the First World War.

On December 21, 1915, Winnipeg mayor Richard Waugh flipped the switch on a 12-metre-tall fir tree laden with hundreds of lights in the square out front of the old “gingerbread” city hall. Over the next three days, military and community bands played next to the tree and collected money for soldiers’ families who were having trouble making ends meet.

Waugh said at the time: “Many kiddies will miss their daddies this Christmas and we are going to make them happy as is possible under the circumstances.”

The campaign raised nearly $1,000, enough to purchase seven tons of food for hampers. It was such a success that the following year’s ceremony was moved up to December 11th and began with a review of hundreds of troops as they marched through Portage and Main on their way to city hall.

The Christmas tree lighting ended with the war in 1918 but was revived a decade later by mayor Daniel McLean. In subsequent years, two smaller trees were often substituted for one large one.

The tradition continued through the Depression and the Second World War. It appears that there was no charitable campaign associated with the tree, so the formal lighting ceremonies were dropped.

It was mayor Stephen Juba, never one to shy from a photo op, who brought back the formalities when he became mayor in 1957. It became a joint ceremony to illuminate both the civic tree and downtown decorations and usually featured the mayor and chair of the Downtown Business Association pulling the switch together.

The only years that there appears not to have been a civic Christmas tree were 1962 and 1963 when the old city hall was demolished and a new one built. In November 1964, just weeks after its official opening, a 12-metre-tall tree appeared in the new Civic Centre courtyard.

Decorating Winnipeg’s downtown at Christmas was a building-by-building affair up until 1929. That year, the Beautify Winnipeg Committee of the Board of Trade polled downtown businesses to see if they were interested in contributing to a collective campaign that would “inculcate a spirit of cheer and good-will throughout the city.”

Despite the stock market crash, which took place during the voting period, 85 per-cent of business owners agreed to pay a 50-cent levy per foot of frontage to help fund the project.

The decorations consisted of illuminated Christmas trees attached to lamp posts with cedar boughs strung between them. There was also festoon lighting wide enough to cross the main thoroughfares. They were all installed along Main Street from city hall to Graham and along Portage Avenue from Main to Memorial.

The Board of Trade had two sponsors to assist with the costs. Winnipeg Hydro gave permission to use their lamp posts and provided a discounted rate on the power that was used, and the Manitoba Electrical Association covered the cost of purchasing the lights.

As the Depression dragged on, downtown businesses struggled to survive and the Board of Trade discontinued its campaign in 1933. The city, which received a great deal of national publicity for the display, stepped in to cover the shortfall and the show went on.

The downtown decoration campaign appears to have ended sometime during the Second World War but was revived in 1956 thanks to the Downtown Business Association in conjunction with the city and Winnipeg Hydro.

They installed nearly 70 illuminated trees, 25 wreaths, and numerous painted wooden signs depicting Christmas scenes along the centre medians of Portage Avenue and Main Street. The overhead festoon lighting was also back. All were installed on Main Street from Market to Portage and along Portage Avenue from Main to Memorial.

In 1959, the Downtown Business Association purchased four illuminated decorations consisting of “spirals, stars and illuminated plastic material” that were installed over Main Street between McDermot and Bannatyne avenues. These strings of lights, sometimes referred to as “the curlicues”, each contained over 1,000 bulbs.

The curlicues proved popular and more were purchased as the years went by until the city had at least 18 of them. They became the defining downtown Christmas decoration for decades to come.

In 1999, new technology and a Portage Avenue redevelopment project meant big changes to Winnipeg’s downtown Christmas decorations. Gone were the curlicues and greenery in favour of what is now a collection of 750 pole-mounted fixtures depicting snowflakes, angels, elves and poinsettias as well as five centre median winter vignettes. In all, 7.5 kilometers of LED rope lighting is used in the displays.

Christian writes about local history on his blog, West End Dumplings and wishes you all the best for the holiday season!