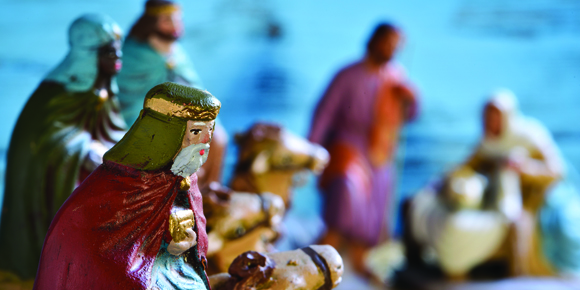 Observation of Epiphany older than Christmas

This first REN of 2017 makes its appearance on an important Christian holy day — The Feast of the Epiphany. This day marks the end of the Christmas season.

Epiphany is known by several other names—Twelfth Day, Little Christmas, Three Kings Day, and The Manifestation of Christ, for example. It is also Ukrainian Christmas Eve.

Western Canada with its large population of Ukrainians once heard a great deal about Ukrainian Christmas. Then, in the 1960s, most Ukrainian churches adopted the Gregorian calendar, the calendar in world-wide use today.

Having moved away from the Julian calendar, the large majority of Ukrainian Christians now celebrate Christmas on December 25. Some Ukrainians enjoy the best of both worlds and observe two Christmases.

Eastern Orthodox tradition still follows the Julian calendar. For those adherents, Epiphany falls January 19 and is known as Theophany.

What exactly is Epiphany and why is it religiously significant?

It is the manifestation or revelation of Christ to the gentiles. This manifestation took place when the Magi, guided by a star, arrived in Bethlehem to discover the Holy Child in a stable.

These Magi, or Wise Men, also known as the Three Kings, have traditionally been called Melchior, Caspar, and Balthasar. However, the Bible does not name them or even say how many they were. Matthew tells us only, “Now when Jesus was born in Bethlehem of Judaea in the days of Herod the king, behold, there came wise men from the east to Jerusalem” (Matt.2:1).

Therefore, their numbers and their names must be viewed as folklore.

The observation of Epiphany is older than that of Christmas. As well, the Feast of Epiphany is regarded as the more important of the two celebrations. First commemorated in the 4th century, it was bigger than, Christmas until the 1800s.

We glimpse this importance in the fact that Shakespeare wrote a play called Twelfth Night and every person of his time knew precisely what Twelfth Night was—the night before Epiphany, the beginning of the twelfth day of Christmas. In Shakespeare’s time, Christmas celebrations continued during all the twelve days of Christmas.

Traditionally, Twelfth Night is also the time to take down Christmas decorations and throw out the tree. In fact, many people swear it is bad luck to display any sign of Christmas after January 6. Of course, others believe the opposite—that Christmas décor must be gone before Epiphany arrives.

Without a capital ‘e,’ epiphany means, “a moment of intuitive perception; a sudden understanding.”

It is a Middle English word which originated in the Greek epiphainein (reveal) and which entered English via the Old French word epiphanie (revelation). This word is also found in Latin where it is epiphania.

Many people have tried to find hidden meaning linking the song “The Twelve Days of Christmas,” to the religious Epiphany. But it is only a song and any supposed code is imaginary.