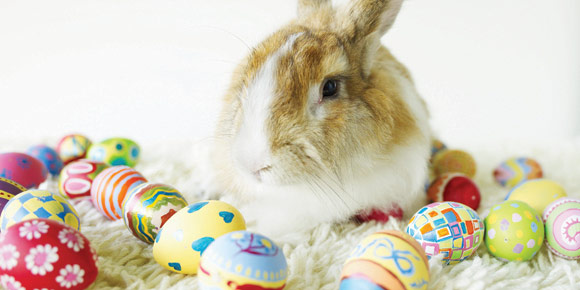 Say hello to the Easter Bunny

The Easter Bunny is first mentioned in a 1682 German treatise entitled, De ovis paschalibus (About Easter Eggs), by Georg Franck von Franckenau. Although this animal is Easter’s most recognizable symbol, almost nothing is known of its origin and history.

Traditionally, the bunny carries a basket of eggs which he hides for children to find Easter morning. The legend of a hare bringing eggs at Easter has an unclear origin. However, it’s known that Eostre, goddess of both Spring andfertility, took the hare as her earthly symbol. Both hares and rabbits, prolific breeders, are viewed as fertility symbols. The egg is another symbol of fertility.

Fertility was important to ancient people who wanted and needed a recurring promise of rebirth. Eggs and rabbits represent this. Spring itself is the season of rebirth.

The belief in an animal bringing eggs at Easter was carried to North America by Protestant Germans in the 18th century. Those Germans called the egg-bringer der Osterhase (Easter Hare).

Today, in much of Europe, that animal is indeed a hare, not a rabbit. We don’t know why or when North Americans and most U.K. inhabitants decided a rabbit rather than a hare brings Easter eggs.

The word, “Easter,” evolved from the name of the Saxon goddess, Eostre, whose festival occurred at the vernal equinox. Oxford puts the English adaptation of the word Easter into Old English where it is found as eastre. As so often happened, Christians usurped this pagan festival imbuing it with Christian meaning. It became a celebration of the Resurrection of Jesus.

Eggs have long been associated with Easter. For centuries, they were forbidden food during Lent so they became a special treat once Lent ended. Even today, some Orthodox Christians abstain from eggs during the Lenten period.

The art of decorating eggs is dated to pre-Christian times, but this practice is now indelibly associated with Easter.

Easter is a “moveable feast;” that is, it isn’t observed on the same date each year. Its date was determined in AD 325 at the Council of Nicea.  It falls on the first Sunday after the full moon following March 21. Should that moon appear on a Sunday, Easter is fixed for the Sunday after that.

Hare entered Old English from the Old Teutonic, hason. A rodent of the genus Lepus, it has long ears and hind legs, a short tail, a divided upper lip.

Rabbit, in English from about 1500, is from the Flemish, robbe (rabbit), also of the genus Lepus. This word’s ultimate source is unknown.

Bunny (1606) is a pet name for a rabbit, arising from the word, bun (1587). Bun means “squirrel,” but in various English dialects it came also to mean “rabbit.” Oxford labels bunny a “diminutive of bun, a familiar name for the rabbit or squirrel.” Bun’s origin is unknown.

Egg entered Old English as aeg from the Old Teutonic ajjoz. Oxford defines egg as, “The oval body laid by a female bird and containing the germ of a new individual.” That’s how the egg as a symbol of fertility got its start.

So say “hello” to an animal that doesn’t lay eggs but is enduringly associated with them.