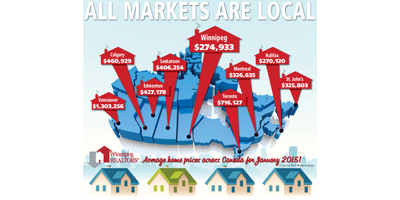 Most newspaper articles this week that commented on the Canadian Real Estate Association’s March MLS® market release did not provide any indication to readers that real estate markets in each Canadian city are influenced by local conditions.

Do not get caught up in national stories that make broad-brush statements or generalizations about all Canadian real estate markets, as they often will have no bearing or substance on the market forces at play in your city.

An infographic created by WinnipegREALTORS® on average house prices across the country at the end of January showed stark differences in average house prices. Vancouver’s average house price was $1,303,256 and Toronto’s was second highest at $716,127. On the other end of the price spectrum, Winnipeg and Halifax were neck and neck at $274,933 and $270,120, respectively. Saskatoon, Edmonton and Calgary were all over $400,000 with the latter being the highest at $460,929.

Markets also vary according to sales activity, listings and price adjustments. For example, Winnipeg saw a slight decrease in its average house price. It dropped from $296,552 in March 2014 to $294,560 in March 2015.

However, headlines such as one from CBC News posted on April 15 indicated the average Canadian house price had climbed nine per cent. In this instance, the average price increase is skewed considerably by Toronto and Vancouver which are both experiencing a shortage of new listings. Winnipeg is the exact opposite with large increases in news listings and, subsequently, a very healthy supply of available listings.

As for residential property sales, Vancouver’s were up 50 per cent so it’s no surprise as the city is experiencing price increases based on demand outstripping supply.

Despite a decrease in Winnipeg’s March average house price, sales still rose 12 per cent. This is in part due to demand remaining brisk, although not to the extent that it was able to match the large month-to-month increases in new listings coming on the market.

Another interesting and challenging local market is Calgary’s. It experienced a 30 per cent sales decline in March compared to March last year, as a result of the negative impact resulting from the precipitous drop in oil prices, but prices actually increased four per cent.

With respect to listings, new listings in March shot up 33 per cent in Winnipeg, whereas the number of new listed homes in Canada only rose 7.6 per cent. For the first quarter of this year, listings in Winnipeg were up 26 per cent while the national percentage is only 5.1. The only other market across Canada that even comes close to Winnipeg’s is Edmonton’s with a hefty 20.5 per cent increase in listings.

Beyond what can be typical demand/supply forces that dictate prices in any given market, it can also be differences in government taxes that impede activity in a specific market segment.

A case in point is how much Vancouver and Toronto have been enjoying strong first-time buyer sales activity. But in Winnipeg, this market segment has been more restrained since there is no first-time homebuyer land transfer tax exemption as exists in Ontario and B.C. High land transfer taxes amounting to thousands of dollars are on placed top of the down payment requirement. The tax must be paid before you can take title to a new property. Such a tax can literally eliminate a first-time buyer from becoming a homeowner. It is difficult for them to save up for the down payment and also pay the land transfer tax.

Another comparison between local markets shows differences in where all the sales activity is occurring. In Winnipeg three out of four, or 75 per cent, of all March single-family home sales were from $150,000 to $350,000. The most active price range for Calgary is from $450,000 to $499,999.

CREA’s president, Pauline Auger, in the news release for March MLS® activity, said: “Like the weather, all real estate is local and nobody knows your real estate market better than REALTORS®, who remain your best source for information about sales and listings where you currently live or might like to in the future.”