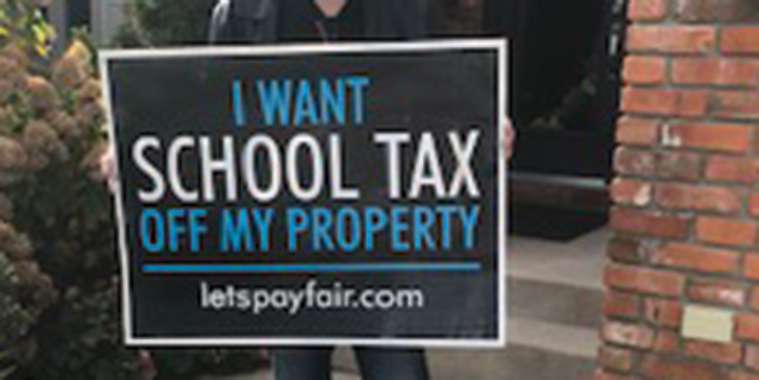 Did you know that 54.6% of our total property taxes collected in Winnipeg this year were for education?

School taxes in other cities like Calgary make up a far less percentage of total taxes. So while we applaud the City of Winnipeg in holding the line on municipal property tax increases to 2.33% in each of the next four years as a result of approving their first multi-year budget (2020-23) this spring, school taxes are exceedingly high and continue to place a real burden on all property owners.

Along with local REALTORS® throughout the province,  the Manitoba Real Estate Association (MREA) has been very active advocating for this change. Following is a statement from Lorne Weiss, Chair, MREA Political Action Committee, and David von Meyenfeldt, MREA Director of Public Policy.

The Manitoba government’s Speech from the Throne on October 7 signalled a victory for homeowners, homebuyers, and REALTORS® in Manitoba. In the speech, the province announced that the gradual elimination of the education property tax will begin next year.

For many years, REALTORS® have called upon government to reform the education property tax
system in Manitoba.

Manitoba is the last province in Canada where school boards have the sole authority to set property tax rates without a plebiscite. With 37 different school divisions having the ability to set their own mill rates, the consequence is an overly complex and uneven system of taxation. Often, we become aware of properties of similarly assessed value that are subject to vastly different education amounts on their property tax bills.

MREA believes implementing a more even and effective system of funding for education can help make Manitoba a more attractive place to own a home, raise a family, and build a business.

Further to our advocacy work, an initial sign of movement on the file came in the 2019 provincial election.  During the campaign, Premier Brian Pallister pledged that a re-elected Progressive Conservative (PC) government would eliminate the education property tax over a period of ten years.  An exact date for the launch of the gradual elimination of the tax would be determined later.

The October 7 announcement provided additional good news. A 2021 launch of the tax phase-out would be sooner than some may have expected. The announcement was certainly timely given the challenging circumstances of the present year.

In the face of Covid-19, many of us in the real estate profession are concerned about the weight of the pandemic on income levels and homeownership affordability.  We understand the importance of ensuring Manitoba’s real estate market remains accessible for new buyers.

Now more than ever, families, seniors, and homeowners in the province deserve a break.  In addition, many small businesses and sectors of the economy are in need of assistance to make ends meet.

We believe tax relief must be a central component of the economic recovery efforts.  Lowering taxes is a direct way to help individuals and businesses have more money available to pay their bills at the end of the month.

MREA has been proactive in communicating this message to government.  On behalf of the over 2,200 real estate professionals in the province, we commend the government for recognizing amid the pandemic that Manitobans need tax relief sooner, not later.

Amid the uncertain times, it is reassuring to know that tax relief is on the way for residential and commercial property owners as well.

In an email message to MREA, Finance Minister Scott Fielding noted the province “will phase out the current complex and confusing education property tax system over the next ten years.”

“The phased elimination of education taxes on Manitoba properties will begin next year — one year earlier than first planned — to give Manitobans much-needed tax relief. Rather than burden property owners, our investments in education will continue to grow with an increasing percentage coming from general revenues,” said Fielding.

By removing the education tax from property and sustaining the education system with funding from other sources, the province will help ensure the opportunity of owning a home remains affordable for Manitobans for years to come.

The announcement also sends a strong message to commercial property owners and potential new investors that Manitoba is not only a stable and resilient jurisdiction for business, but also a competitive and dynamic place to invest.

As our advocacy work on this file comes to fruition, on behalf of MREA, we extend our appreciation to WinnipegREALTORS® and Brandon Area REALTORS® for their longstanding support of these efforts.

We look forward to seeing the details of this much-anticipated tax reform plan in the spring 2021 provincial budget. — L.W. and D.V.M.

It cannot be emphasized enough how much this move to phase out education taxes off of property taxes will be welcomed by property owners. We all want to do everything we can to make Manitoba an affordable place to live and invest in.

With the Manitoba Government proclaiming this week REALTOR® Week and acknowledging what
REALTORS® do to help Manitobans successfully navigate through one of the most significant investments of their lives, Premier Pallister made special mention of the government’s commitment to phase out the education tax on property. He added that it is an onerous burden on many homeowners and is one of the things that has created an additional financial burden in particular on Manitoba  families and small businesses.