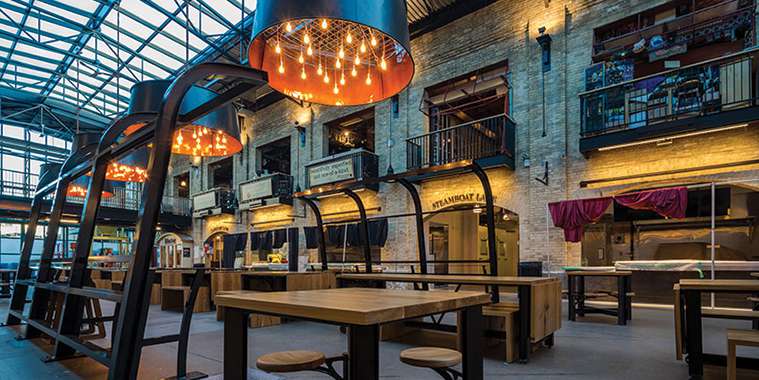 The Forks: A 6,000 year old gathering place that still draws us all together

Looking for something to do this weekend? Look no further than Winnipeg’s own popular gathering place, The Forks, located at the junction of the mighty Red and Assiniboine rivers.

The Forks has been a meeting place for over 6,000 years. Indigenous peoples traded at The Forks, followed by European fur traders, Scottish settlers, railway pioneers and tens of thousands of immigrants. With the transformation of the The Forks over last 30 years, its reputation as a place for people to come together hasn’t changed. Over 4 million visitors come to The Forks each year and more than 1,200 people work on this site.

The Forks was developed specifically as an all-season gathering and recreational place, featuring an exceptional array of dining options, fantastic local makers and retailers, a constantly changing slate of entertainment and events, and many unique attractions that encompass the site’s natural, historic and built features. There’s literally something for everyone!

The Forks Market is home to a vibrant and deliciously eclectic food hall featuring the best in local offerings on the main floor and fantastic local maker plus retail options on the second floor. What is now The Forks Market was once horse stables and haylofts during the height of the railway days.

The pinnacle of The Forks Market is a six-storey high tower with a viewing platform that offers a dramatic view of the famed junction of the Assiniboine and Red rivers along with Winnipeg’s skyline.

Johnston Terminal is a four-storey Heritage Building constructed in 1929 and completely restored in 1993. The main and second floor tenants are retailers, while the third and fourth floors are leased as offices.

Inn at the Forks is the first and only hotel to be located at The Forks. Enjoy the warm hospitality at this spectacular hotel and its truly fantastic setting.

The Plaza at The Forks is Canada’s best and largest urban skate plaza and bowl complex, and has had the distinction of being sought out by such prominent skaters as Tony Hawk and Bam Margera.

CN Stage and Field has been the epicentre for many of Winnipeg’s finest concerts and events. The Forks is also a favourite haunt for buskers. Visitors can find family entertainment at distinctively marked Busk Stops throughout the site.

The Forks is also the location of the Canadian Museum for Human Rights. Since opening in 2014, it has shone a spotlight on the world of human rights.

Climb the stairs of the historic Via Rail Union Station to tracks one and two where you will discover the Winnipeg Railway Museum, dedicated to the preservation of Manitoba’s rail heritage.

The Forks Historic Rail Bridge was built in 1888 and is the optimal spot from which to observe the meeting of the Assiniboine and Red rivers.

Located just East of Union Station, the Alloway Arch has been constructed from the façade of the original Alloway and Champion Bank, which was once the largest private bank in Western Canada. One of its owners, William Forbes Alloway, went on to establish The Winnipeg Foundation in 1921. The Arch represents Mr. Alloway’s investment in our community while the adjacent fountain symbolizes the pooling of gifts made by people from all walks of life to build The Winnipeg Foundation.

The Travel Manitoba Visitor Information Centre is also located here, as well as the Manitoba Theatre for Young People and the Children’s Museum.

At the heart of The Forks, The Prairie Garden is a lush tribute to Winnipeg’s prairie roots. Also, a public orchard contains 61 fruit trees including apple, apricot, cherry, pear and plum, and as many as 75 fruit bearing shrubs. In collaboration with Citigrow, an Urban Garden at the site contains vegetables and herbs harvested by the Inn at The Forks and integrated into their menu.

Rent a canoe or dock your vessel at The Forks Historic Port, a place where the York boats and sternwheelers of times long-past brought goods to forts and pioneer settlements. Hop aboard the Splash Dash Water Bus and cruise to the Exchange District, Osborne Village, Corydon, Downtown and St. Boniface. Or, if water isn’t your thing, starting at The Forks Market, the Winnipeg Trolley Company tours take you to over 90 sites across the city.

If you prefer to walk, you can take a 6,000-year journey with a Parks Canada interpreter and uncover what lies beneath your feet on an easy guided walking tour. Or take a private stroll along the Wall Through Time which forms a graphic retelling of historic events that took place at The Forks throughout its history, and then continue on along one of the city’s jewels, The Riverwalk, which winds along the riverbanks from underneath Esplanade Riel all the way to the foot of the Manitoba Legislature. Featuring interpretive plaques concerning area history, the walk showcases a distinctive river’s eye view of central Winnipeg.

Near the convergence of the two rivers is a natural shallow amphitheatre known as the Oodena Celebration Circle. It pays homage to the 6,000 years of Aboriginal peoples in the area. Oodena, Ojibwe for “heart of the community”, features ethereal sculptures, a sundial, interpretive signage, a naked eye observatory and a ceremonial firepit.

The Forks is open. Site tenants and Forks Market tenants are operating with varying hours. Please contact tenants directly to determine their hours, and remember to maintain proper physical distancing at all indoor and outdoor venues.