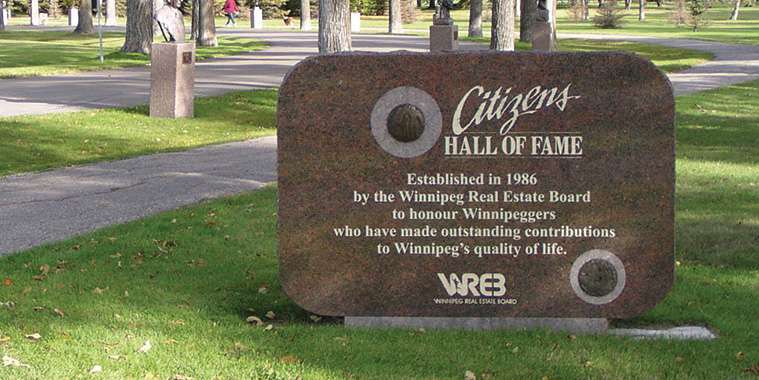 Citizens Hall of Fame: A fantastic way to inspire our leaders of tomorrow

We know teachers are looking at creative ways to keep their students busy at this time when they are staying home. Why not explore a program that really brings to life outstanding citizens of Winnipeg who truly made a contribution to our quality of life? Call it our own local “biography channel” where we can learn about and draw inspiration from individuals who often went well beyond their own field of endeavour and success to build a brighter future for all of us.

Winnipeg’s Citizens Hall of Fame was established by WinnipegREALTORS® in 1986 to honour and celebrate outstanding contributions of citizens to the quality of life and development of our city, and even the world beyond.

A major impetus behind making this unique awards program possible was the vision of its founder, REALTOR® Harry De Leeuw, a past-president of all levels of organized real estate and a true leader in our industry. Former mayor Bill Norrie was instrumental to this end as well, and is one of our 46 inductees.

The Hall of Fame is a first-of-its-kind in presenting likenesses of the inductees in a splendid park setting. Located in the southeast corner of Assiniboine Park, it is a permanent memorial honouring the pursuit and attainment of individual excellence and achievement on behalf of one’s community. It is a source of education to the Winnipeg community and one that can benefit and inspire our youth to see themselves as future leaders who can achieve and give back to their community.

Categories for public nominations include community service, the professions, arts, business and public affairs, as well as “other” since an individual’s contribution to Winnipeg may not fit easily into a specific field of endeavour. It’s often the case that many of our inductees excel and succeed in more than one of the nominating categories.

One inductee worth clicking on first when you visit the Citizens Hall of Fame at www.winnipegrealtors.ca is Dr. Naranjan Dhalla. He was inducted in 2000 under the profession and community service categories. Dr. Dhalla is a world leader in heart research who has brought much acclaim to Winnipeg through his pivotal role in setting up the Institute of Cardiovascular
Sciences at the St. Boniface Hospital Research Centre.

Most germane to teachers and students intrigued enough to explore this unique local program further is the video Dr. Dhalla participated in after receiving the Citizens Hall of Fame medallion. Just click on the link to the left side of Dr. Dhalla’s page that reads Video — Take a walk with Dr. Dhalla, and you’ll hear him give a heartfelt description of how this program is a repository of Winnipeg’s history and significance through the individuals that have been inducted.

One thing to really stress to students is that these inductees are all citizens of Winnipeg. Through much effort, hard work and self-determination, they have shown the initiative to pursue a calling and give of themselves to make this world a better place.

There are different streams of pursuit students can delve into, depending on their area of interest, such as the arts. Examples of Winnipegger’s who have contributed to the arts specifically are:

• Leo Mol was a world-renowned sculptor and  painter who now has a permanent commemorative garden in Assiniboine Park showcasing his artistic  sculptures and other works. He was also one of the sculptors to render a number of Citizens Hall of Fame inductee portraitures, including that of former mayor Bill Norrie.

• Arnold Spohr was the long-time artistic director of the Royal Winnipeg Ballet, who through his outstanding leadership and guidance, built up a regional troupe to became acclaimed world-wide in cities such as New York, London and Moscow.

• John Hirsch, through his love of theatre and as a scholar of English literature at U of M, became founder of the Manitoba Theatre Centre (MTC). He was also artistic director twice for the Stratford Festival and is a member of the Order of Canada.

• Carol Shields is internationally acclaimed for her novels, poetry, short stories and plays. She has done much to enhance Winnipeg’s artistic and cultural life. She received the Pulitzer Prize for Fiction and the Order of Canada for The Stone Diaries, in which a recognizable Winnipeg is portrayed in a positive light.

• Gabrielle Roy received the Governor General’s Award three times for her outstanding literary achievements. She received the New York Literary Guild Award for her first novel in 1945. There is also the Gabrielle Roy House in St. Boniface, which was the inspiration for her book Street of Riches.

• Marshall McLuhan received a gold medal from the U of M in English and Philosophy in 1933, following up with a Masters Degree in Literature and going on to obtain his PhD at Cambridge University to eventually become a distinguished and highly quoted professor of English Literature at the University of Toronto. His non-fiction book The Gutenberg Galaxy received the Governor General’s Award.

• Lemoine Fitzgerald was the principal at Winnipeg’s School of Art from 1929 to 1949. He was invited to become a member of the famous “Group of Seven” artists in 1932 and was the founding member in 1933 of the Canadian Group of Artists. There is a Fitzgerald Building at the University of Manitoba.

• Sol Kanee is included in the arts field for his pivotal role in helping the Royal Winnipeg Ballet gain international acclaim and holds many prestigious awards.

• Bill Loewen is a community philanthropist considered one of Winnipeg’s unsung heroes when it comes to supporting the arts. He received the Golden Baton Award from the Winnipeg Symphony Orchestra in recognition of his contribution over many years.

As we think of inductees that fit the times we now find ourselves in, three more need to be singled out.

With the Red River Floodway opening up last Friday, how can we not be grateful after all these years for former premier Duff Roblin, who was responsible for initiating its construction? Affectionately known as Duff’s Ditch, this engineering feat of epic proportions has saved Winnipeg countless times since its completion in 1968 and has prevented over $40 billion in cumulative flood damage.

Dr. Allan Ronald is an internationally respected expert in infectious disease. He was well respected and renowned as a mentor of young physicians and for his dedication to advancing infectious disease as a discipline. Inducted into the Canadian Medical Hall of Fame, it was stated that Dr. Ronald “exemplifies what it means to be a world citizen”.

A visionary scientific leader in medical research, Dr. Henry Friesen was lauded by former mayor Bill Norrie “for his vision, tenacity, and leadership in acquiring for Winnipeg the ‘Virology Laboratory’ on Arlington Street.” Now called the National Microbiology Centre, it is the only Containment Level 4 Laboratory in Canada, and has given Winnipeg a wonderful strategic opportunity to attract and retain world-class researchers and clinicians. It is currently playing a pivotal role in the search for a vaccine to the COVID-19 virus.