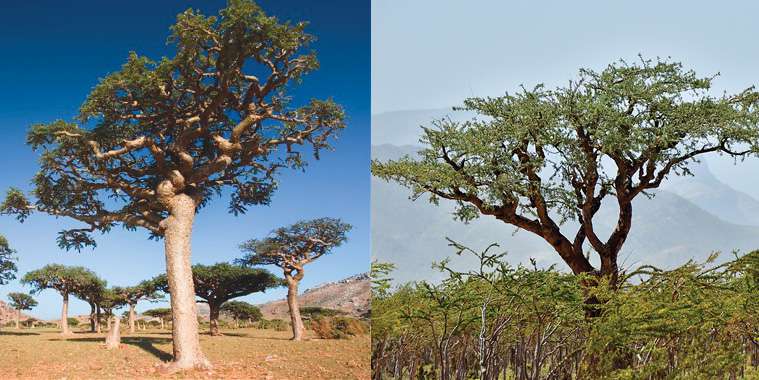 The gifts that trees give us never cease to amaze me. They give us shelter, offering cooling shade in summer and protection against the wind in winter. They give us fuel to stay warm, oxygen to breath and food to eat, both directly and by providing all these gifts to the small animals that also nourish us. They even left us a legacy of oil and gas to help us move from the preindustrial age to a society on the verge of the next breakthrough in our evolution today

Knowing this, it is not surprising that the wise men from the East arrived at the birth of Jesus bearing three precious gifts. One was gold, but the other two were from trees; frankincense and myrhh, each worth their weight in gold.

Myrrh, from a thorny bushy tree, Commiphora myrrah, was used to anoint the dead and to help preserve mummies in Egypt. It had a powerful perfume, a bit balsamic and smoky. Useful as it was for the dead, myrrh was even more useful for the living. It was used to treat a myriad of ailments, from arthritis to asthma to cancer. Even today, it has credibility for its ability to relieve arthritic pain by checking the inflammation that breaks down cartilage and causes pain. Rubbing it on inflamed gums can cause immediate relief.

While myrrh was one of the gifts of the Magi at the birth of Jesus, it was offered to him, mixed with wine, to relieve his pain when he was on the cross. He refused the drink. But at the end, some say 75 pounds and others say 100 pounds, of myrhh were brought to anoint his body in death.

Frankincense and myrrh are both harvested from their trees by making small cuts in the bark, causing the trees to weep. The resin that drips from the bark, especially of frankincense, is known as tears. Frankincense is harvested from the boswellia tree which grows in northern Africa. Long stripes are cut into the bark, causing the tree to weep its precious tears. The best tears come from Boswellia sacra, especially those trees that are struggling for life growing out of sheer rock. A network of buttressing roots attaches to the rock like a succubus, preventing the tree from being uprooted in an area known for its violent storms.

Frankincense is thought to be psychoactive and an antidepressant. One report says that “burning incense can make you feel warm and tingly all over.” It is said to activate “ion channels” in the brain. In 2017,  Johns Hopkins University discovered that burning frankincense “has a strong anti-depressant and anxiolytic effect which can leave you feeling open and relaxed.  Frankincense helps your mind to rest and simply perceive the world around it.”

Unfortunately, the boswellia tree is endangered. Animals love to browse its leaves and fruit. And
because frankincense is still in great demand, it is over harvested. This is exacerbated by the fact that tapped trees produce a harvest of seeds that are only 16 per cent viable (untapped tree seeds are 80 per cent viable). The tree needs to be eight to 10 years old before the resin can be harvested.

Let’s hope someone finds an answer to save the tree for future generations.