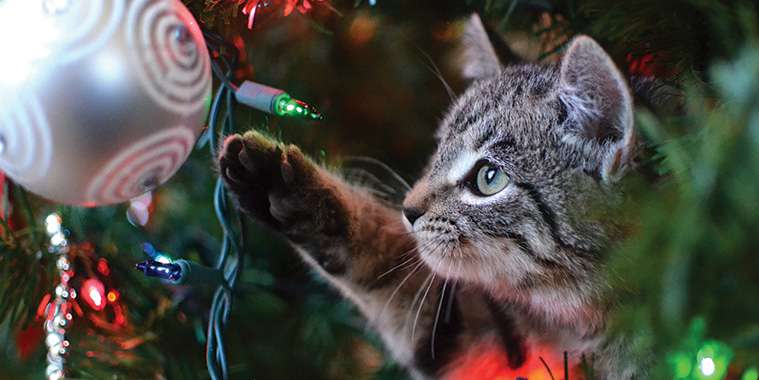 The fine art of setting up your Christmas tree

Have you always wanted to set up a picture-perfect Christmas tree? But if the thought of wrestling a 7-foot-tall Norway spruce through the door, into a tree stand, and then decorating it to the nines sounds dicey, that’s because it is. One wrong move could wreak havoc on your home — and do serious damage to those warm and fuzzy holiday feels. So follow these Christmas tree setup tips so you can keep your home safe and yourself sane through this critical early stage of the holiday season.

Before you set out to find this year’s tree, do yourself and your home a favor and take care of some small chores that will save you time and trouble later.

“Prep the house first,” says Debi Staron, co-founder of Dr. Christmas, the company that has trimmed the trees of A-list celebs such as Heidi Klum and Kate Hudson. “Move furniture out of the way; protect the floors. Fresh-cut trees can have sap dripping from various areas that can damage your hardwood floors, carpeting, or linoleum, especially if you have to lay the tree down. So it’s best to put out a sheet or cardboard to protect your flooring.”

If you’ve ever found yourself in an open field surrounded by fabulous Fraser firs and become so enamored with one that you neglected to realize it will take up 80% of your living room, you’ll appreciate Staron’s next tip: Take some measurements.

“The average person doesn’t know the height of their ceiling,” she says. “Don’t fall in love with a tree that won’t fit in your home. After you’ve measured for height, measure for width.”

Make sure the tree is all you’re bringing home

“While at the lot, ask them to give it a good shake,” says Staron. “Not just to shed those loose needles, but to get rid of bugs and spiders and other creatures who love to live in there.” Gross.

If you have curious kids and/or cats, you may be afraid to leave the room for fear that they’ll attempt to shimmy their way up to the star and topple your tannenbaum. That’s why it’s a good idea to anchor your tree, Staron suggests. Stand it in the corner, and wrap fishing line around the trunk and then secure each end with hooks placed on the wall or windowsill.

“They only leave pin pricks, and you can putty it later. But, really, no one will even notice,” she says.

If children and pets aren’t an issue, securing your tree is still a great way to protect your furnishings. Staron recalled a client who hired Dr. Christmas after another company neglected to anchor the tree and it, along with a bevy of glass ornaments, came crashing down on a baby grand piano.

Nothing can ruin the festive mood faster than having to make a 911 call. Fire departments responded to an average of 210 home fires caused by Christmas trees each year, according to the National Fire Protection Association, resulting in an annual average of seven deaths, 19 injuries, and $17.5 million in property damage.

To prevent your tree from becoming a fire hazard, first start by selecting one with fresh green needles that don’t fall off when you touch them. If your tree is already cut, ask for it to be cut again so it’s ready to start drinking once it arrives in its new home.

“If it’s not freshly cut it won’t draw up water,” Staron says. So just how much needs to go? According to Purdue University’s Forestry and Natural Resources, a tree that has been cut for more than six to eight hours needs to have a half-inch or more cut off the butt end before it’s placed in a tree stand and watered.

The holidays can be stressful enough without having to spend hours untangling and stringing lights, only to find out they don’t work. Staron says do yourself a favor and store lights by wrapping them around a cardboard tube with the plug easily accessible.

And, oh yeah — if you’ve got cats, keep glass or breakables closer to the top where they’re less likely to get knocked off and broken.