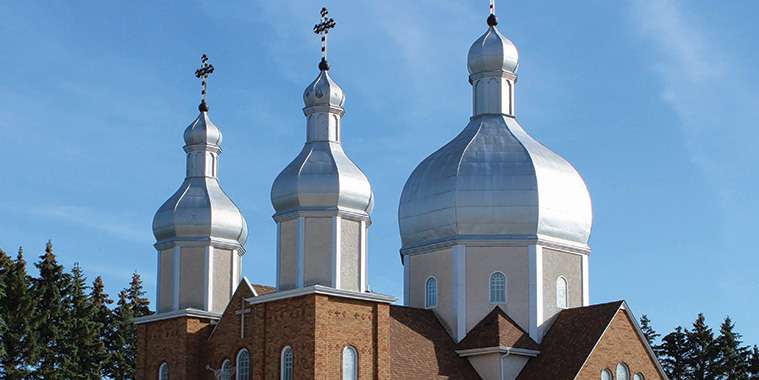 The community of Rossdale, Manitoba, is located about 30 kilometres north of Winnipeg, east of Highway 8, in the Rural Municipality of St. Andrews.

The region was settled mainly by Ukrainians who came to Manitoba between 1900 and the start of the First World War. A long-standing Ukrainian nickname for the area, “Parky”, can be found in newspaper ads as late as 1960 and on the blueprints for the local church.

More than a century after it was settled, Ukrainian culture is still alive in Rossdale with an active Ukrainian Catholic church, and the Rossdale Ukrainian Dance School which was established in 1977 and has performed across Canada and in the United States.

The most prominent building at Rossdale is more commonly referred to as St. Mary’s Ukrainian Catholic Church.

When it came time for a new church in the late 1950s, two prominent priests played important roles in its creation.

The parish priest at St. Mary’s in the late 1950s was Fr. Semen Izyk. A priest in Western Ukraine at the outbreak of the Second World War, Izyk smuggled food to members of the Underground until he was found out, arrested by the Gestapo, tortured and spent the next three years in Nazi concentration camps. He came to Winnipeg in 1947 after being liberated from Bergen Belsen.

Izyk, who spoke often about his experiences and the suffering of others in the camps, soon became a well known and highly respected figure in Manitoba’s Ukrainian community.

The second priest to play a major role in the new St. Mary’s was its architect, Father Philip Ruh. Born in France and ordained in Holland, Ruh spent three years in Ukraine before being sent to Canada in 1913 to serve the Ukrainian Catholic communities of the prairies.

Ruh had no formal training as an architect, but when congregations repeatedly told him that their greatest need was a proper church to worship in, he began designing them. There are over thirty Ruh churches on the prairies, half of which are in Manitoba. He is best remembered for the Church of the Immaculate Conception at Cook’s Creek and adjoining grotto that he spent the last 30 years of his life building.

Construction of the new church at Rossdale began in spring 1958 on land donated by a parishioner, and by late September a ceremony was held to bless the dome and new cross. It held its opening service on January 3, 1960.

The grounds of the church include a cairn commemorating the centennial of Ukrainian settlement in Canada (1891 – 1991).

St. Mary’s is still an active church with services every Sunday.

Across the street from St. Mary’s Church is the Rossdale Parish Hall. The original hall was built in the 1930s and this one was constructed in the mid-1970s to coincide with the church’s 60th anniversary.

The 164-person hall cost $75,000 to build and is still an important meeting space in the community, playing host to numerous community gatherings, meetings and performances.

It’s not just the Ukrainian community that is represented in the Rossdale area today.

In 1991, the United Croats of Canada constructed a 5,000 square foot banquet hall and community centre that features a stage and full kitchen. It is situated on a 12-acre site that includes picnic areas and soccer pitches.

The cultural centre and grounds are currently for sale.