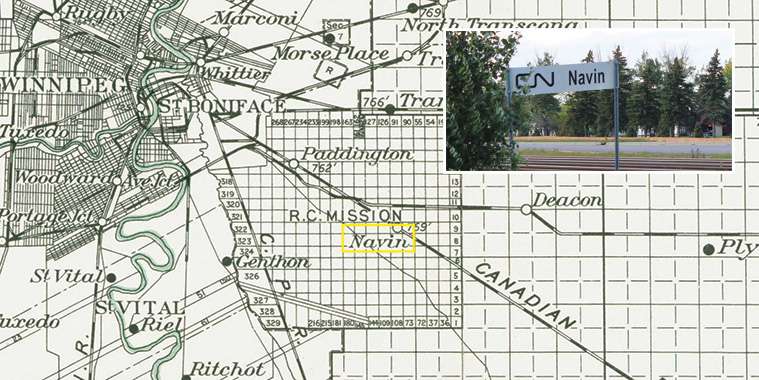 The resurrection of Navin, Manitoba

Manitoba’s countryside is dotted with defunct communities whose names can only be found in history books. Navin, Manitoba was one of these until earlier this year when Canada Post announced that it would be reinstated as a mailing address for a few thousand residents in the Rural Municipality of Springfield.

Navin was established as a stop along the Canadian Northern Railway’s mainline from Thunder Bay to Winnipeg constructed between 1898 and 1902. It fell between the communities of Lorette and St. Boniface and roughly encompassed the area from the present-day southern edge of Symington Yards to Tinkertown on both sides of the Trans-Canada Highway. It is still a point on CN’s Sprague Subdivision, though the days of train service are long gone.

The first settlers to this part of the province came well before the railway did. They were mainly French farmers along the Seine River and the district was known as Seigneurie. According to the province’s publication Geographical Place Names of Manitoba, the siding was named in 1904 after a local landowner and the district took on that name.

Thomas Naven, spelled different than the community, was a dairy farmer whose primary residence was in the area we now know as Elm Park in St. Vital. It is said that in the late 1890s he was part of the consortium that built a pontoon bridge across the Assiniboine River where the Bridge Drive-Inn is today and sold concessions to visitors as a side business.

The community of Navin did not have an actual townsite. Its services, such as a railway station, school and post office, were spread through the district.

The most important feature of Navin was its train station. Initially, it was just a siding — a platform along the track to load and unload cargo. It is unclear when an actual station was built, though it may have been by 1907 when Canadian Northern launched its “Lake Superior Express” passenger service with Navin as one of its stops. In the 1911 book “Canada’s West and Farther West” the author describes passing Navin’s train station en route to Winnipeg.

Navin’s few mentions in local newspapers were usually due to sad news involving the rail line. There was the odd derailment including one in 1905 that caused the death of CN employee Frank Kennedy. In 1927, train conductor Richard Taylor noticed someone slip off the train at Navin and thought he may have been a fare evader. He ran after the passenger and died of a heart attack whilst the two were arguing.

Navin Station was a “flag stop” which meant that trains would not stop to pick up passengers or freight unless the station agent displayed a flag to signal the crew. A former resident of Navin in the 1950s and early 1960s recalls the station and a collection of bunkhouses located where Symington Road meets the train tracks east of Winnipeg, now the dead end of an industrial road.

Another important location within the community was its school which was established in 1899 as
Seigneurie School Division No. 1000. The Springfield and District centennial history book puts its location near the interchange at the eastern foot of the Highway No. 1 bridge that crosses the tracks south of Symington Yard. The name was changed to Navin School Division in 1945.

The original schoolhouse was replaced in 1957 by a new building. It still contained just one classroom for its 25 students in grades one through eight, but also featured a kitchen and indoor washrooms.

Not long after the opening of the new school there was debate about its future.

In 1959, the school became part of the newly created Transcona-Springfield School Division and the pressure was on to consolidate its collection of single-room schools. Navin’s fate was discussed at a January 1965 Municipality of Springfield council meeting. Fifteen delegates appeared and were split between those wanting to retain the old school with the addition of another classroom and those who felt their children would receive a better education at a larger, consolidated school.

The decision was made to close Navin School after the following school year and, though the region was in the Transcona-Springfield School Division catchment area, electors voted consolidate with the St. Boniface School Division. The old schoolhouse was sold off in September 1967 and became a residence.

The last service in the community to leave was its newest. A post office was established at Navin in May 1961 with John Happychuk as postmaster in a small building on Symington Road south of the tracks. Through the 1970s it was run by Edna and Gordon Kelsch until it closed in the summer of 1976.

It was not depopulation or a lack of commercial activity that ended Navin’s run as a community. In fact, with the Trans-Canada Highway built through it in the early 1950s and the opening of Symington Yard in 1962, the area became busier than ever with industrial businesses and a post-war influx of new immigrants. It was, however, Navin’s close proximity to the ever-growing communities of Transcona, St. Boniface and Winnipeg that did it in.

In the past couple of decades, the area has seen a resurgence in residential development and now features many fine homes on large lots. This population growth has helped Navin buck the trend and resurrect itself as a community.