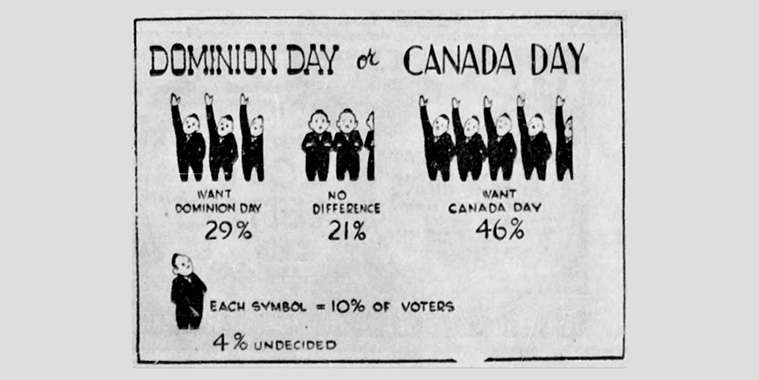 As we get ready to celebrate Canada’s 152nd birthday it may come as a surprise that the holiday has only been known officially as “Canada Day” since 1983. The change from Dominion Day to Canada Day was decades in the making and quite controversial.

On May 22, 1867, Queen Victoria signed a proclamation that “on and after the 1st day of July 1867, the Provinces of Canada, Nova Scotia and New Brunswick should form and be one Dominion under the name of Canada.”  The term “dominion” comes from the bible, Zechariah 10:9: “His dominion will extend from sea to sea.”

Governor General Charles Monck issued a proclamation of his own the following year declaring July 1 the “day on which the anniversary of the formation of the Dominion of Canada be duly celebrated.” It wasn’t until 1879 that the snappier moniker “Dominion Day” was created and it was made a national holiday.

Manitoba missed the first few Dominion Days as it did not become a province until 1870 but made up for it in 1871 with a celebration in Winnipeg that included a variety of competitions, including a cricket match, running races and “climbing the greasy pole.”

As Canada stepped out from Britain’s shadow, there were several attempts through private members bills to change the name of the July 1st holiday from Dominion Day to Canada Day. The first appears to have been that of Quebec MP Antoine-Philéas Côté in 1946, during the Second World War, who wanted to put the name Canada “in the ears and the eyes of the world.”

Côté’s bill came up for debate in the House of Commons in April. Those against it considered the change akin to Canada turning its back on its ties with Britain. M. J. Coldwell, CCF leader and a supporter of the bill, chided its critics as being “afraid to assume the name of Canada for its national holiday.”

The sometimes boisterous debate went late into the evening and when the final vote was called, the bill passed by a 123 to 62 margin.

As the bill awaited debate in the Senate, the Daughters of the Empire and some church and military organizations campaigned against the Canada Day name. The Winnipeg Tribune called those supporting it as merely “posturing” and claimed Dominion had a “brave, satisfying ring.”

A national Gallup Poll showed a different picture. It found that 46% per cent of Canadians favoured “Canada Day,” while 29% wanted to keep “Dominion Day” and 21% declared themselves “indifferent.” The pollster noted that younger people were “much more inclined” to support the name change than older ones.

The Senate approved Côté’s bill in August with the amendment that the name instead be changed to “National Holiday of Canada,” something Côté seemed to be okay with. The bill was then returned to the House of Commons for final approval.

There was just one opportunity before that session of Parliament ended to bring the bill to the floor of the House and Louis St. Laurent, the Liberal justice minister, chose not to do so. He said that in the rush to clear up legislation there was no time to “consider Senate amendments to public bills moved by a private member.” The Canada Day bill died on the order paper.

The following summer Côté rose during question period to ask his party leader, Prime Minister Mackenzie King, if the government was considering Canada Day legislation of its own. King replied, “I can only say to my honourable friend his bill has not been lost sight of; that it is just one of these things that will have to come forward in due course, but the course is not yet.”

The government never did introduce legislation, but under Louis St. Laurent as justice minister, then prime minister, the term Dominion began disappearing from government departments, (so no more Dominion Health Inspectors or Dominion Bureau of Statistics), and in government publications such as the Canada Gazette.

Thanks to Côté, the name Canada Day entered the lexicon of Canadians. Its use in newspaper stories steadily increased over the next two decades, particularly around the time of Expo 67 when Canada was once again celebrating its independent identity. On a visit to Winnipeg in June 1970, even Prime Minister Pierre Trudeau let the phrase “Canada Day” slip at a public event.

There were a couple of private members bills introduced around the time of Expo. One in February 1966 by Quebec Liberal MP Yves Forest and another in March 1970 by James Brown, Liberal MP for Brandt, Ontario.

In the case of Brown’s bill, the justice committee of the House of Commons recommended that the name of the holiday instead be changed to “Confederation Day,” what July 1st was commonly referred to in Quebec at the time. It was felt that the amendment would appease Quebec nationalists, something Côté did not have to be as mindful of in his era.

The public debate again pitted “traditionalists” with “modernists.” Retired Prime Minister John Diefenbaker campaigned against the change. “Why is there this pell mell rush to obliterate one part of our traditions?” he asked rhetorically in one public speech. He had the support of groups like the Orange Lodge and Monarchists League as well as old-time Tories in Parliament. Brown’s bill appears to have died in the Senate.

It was Harold “Hal” Herbert, Liberal MP for Vaudreuil, Quebec, who finally brought about the name change. He introduced his first private members bill in 1975, telling the House that its purpose was “to discontinue the use of the word Dominion in the Holidays Act and to eliminate the divisiveness caused by this word, so that all Canadians can celebrate their national holiday with pride and pleasure.”

Herbert’s bill did not make it out of the House, nor did another attempt in 1979. In March 1982 he tried once more.

On the sleepy summer afternoon of July 9, 1982, with just thirteen MPs in the House, “Bill C-201, a bill to amend the Holidays Act to replace Dominion Day with Canada Day” was quietly inserted onto the agenda. In less than five minutes, it sailed through its third and final reading taking everyone by surprise, including Herbert who wasn’t present.

It was up to the Senate to decide C-201’s fate. It heard impassioned arguments for both names during its debates and hearings, but it was clear that the tide had turned in favour of Canada Day. Most telling was a November 1981 Gallup Poll that showed 70% of Canadians favoured the name change.

The Senate passed C-201 on October 25, 1982 and it was given Royal Ascent in plenty of time to plan the celebrations for Canada’s first official Canada Day on July 1, 1983.