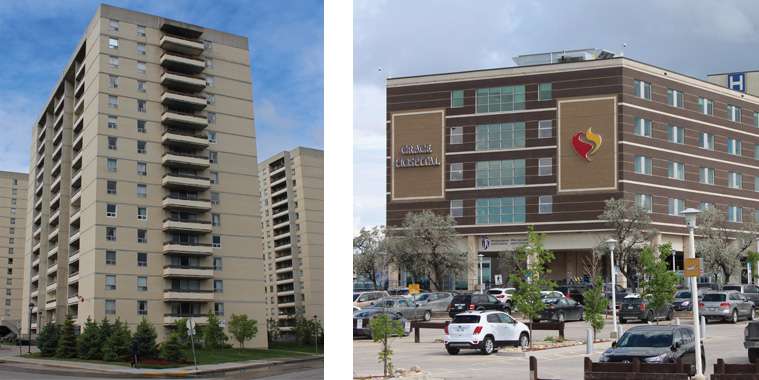 The City of St. James boomed soon after the end of the Second World War as several subdivisions such as Silver Heights were developed. In a period of just a decade, thousands of new residents moved into the community.

What followed in the 1960s were several multi-million-dollar developments that provided St. James with amenities that cities many times its size would be envious of, including the Winnipeg International Airport (1964) and St. James Civic Centre (1967).

Two projects, the Grace Hospital and Courts of St. James, pushed the city’s development westward and saw the creation of the likes of Ronald Street, Booth Drive and Sturgeon Road.

In February 1963, Manitoba premier Duff Roblin and the Salvation Army announced that they had reached an agreement to build the Salvation Army Grace General Hospital in St. James. It would replace the old Grace located in Wolseley which first opened in 1905.

Commissioner Wycliffe Booth, national commander for the Salvation Army in Canada, conducted the sod turning ceremony for the new Grace on June 5, 1964. It was expected to open in early 1966 but its construction was beset by a series of delays, including a fire during the early stages of construction, a railway strike that delayed the arrival of materials, and a labour shortage due to the massive amount of construction taking place in Montreal in the lead up to Expo 67.

The new hospital was finally opened on April 19, 1967 by Premier Roblin and began accepting its first patients on May 7.

Local architects Green Blankstein Russell designed the three storey, 260 bed facility. It was built so that three additional floors could be added later to the patient tower to double its capacity to 500 patients, though this was never done.

The architects’ intent was to make the patient areas of the hospital as “non-institutional” as possible.

The main waiting room and admitting areas were carpeted. After being admitted, patients could be brought to their rooms through dedicated hallways and elevators that would keep them away from the hustle and bustle of the public and service corridors.

Other features included central air conditioning, a 20-unit “adolescent ward” for those who didn’t quite fit into either children’s or adult wards, and seven operating theatres.  A nurse’s residence with gym and a central power plant were also part of the project and connected to the patient tower by a tunnel.

The development took up about 17 of the 20 acres donated by St. James. Another 12 acres of land leading down to Portage Avenue with Sturgeon Creek running through it was developed into parkland, giving the Grace the most beautiful setting of any Winnipeg-area hospital.

In 2008, ownership of the Grace Hospital was transferred from the Salvation Army to the Winnipeg Regional Health Authority.

St. James’ new development wasn’t just government driven. A great deal of private investment also took place during this period and none was larger than the $12 million Courts of St. James.

Owners Confederation Life and Lakeview Developments announced the Courts of St. James in 1965. It would consist of three T-shaped 16-storey residential towers (Hampshire Court, Bronte Court and Lancing Court), with a total of 754 suites ranging in size from bachelors to four bedrooms.

There would also be a recreation building that included an indoor swimming pool, indoor playground for children, and billiards rooms. In the summer, outdoor putting greens and lawn bowling greens would be on offer. The Courts employed a full-time social director to ensure that the spaces were well used.

Other amenities included a two-story underground parkade and an attached shopping mall along Portage Avenue with a Dominion grocery store, bank, pharmacy, restaurants and office space.

One newspaper story referred to the 9.5 acre project as a “city within a city” and it was expected that when completed the towers would make up about ten per cent of the residential property tax base of the city of St. James.

A. W. Hanks, mayor of St. James, performed the sod-turning ceremony in April 1966 for the first phase of the project, the southern tower, shopping mall and recreation building and they opened around October 1967.

The demand for the apartments was so great that developers pushed ahead the construction of the other phases by a couple of years. All three towers were open by August 1970.