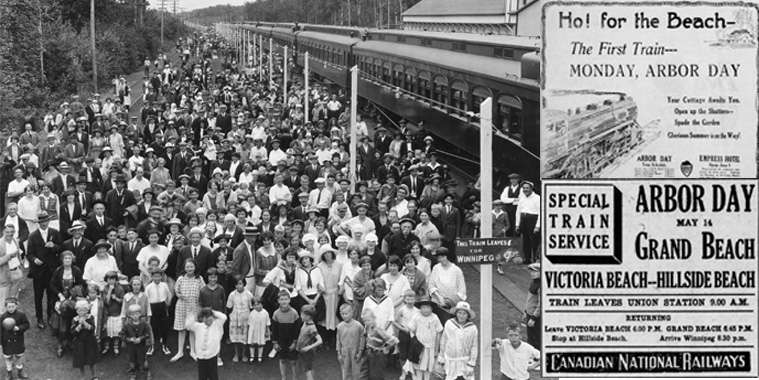 Arbor Day once signalled the start of cottage season

The Arbor Day holiday is a relic of Manitoba’s distant past, but for nearly 40 years it signalled the official start of cottage season.

Arbor Day was created in Nebraska in the 1870s to encourage school children, political officials and landowners to plant trees in the state’s fledgling towns and on its agricultural lands. The idea spread throughout North America and Manitoba proclaimed its first Arbor Day holiday in 1886.

Initially, Manitoba’s Arbor Day was held on the second Thursday of May. It was thought that a mid-week holiday would ensure that the focus would be all about tree planting. When it was moved to a Friday in 1895, then to a Monday a couple of years later, it became, as some predicted, like most other long weekend holidays in the province and celebrated with large sporting events, fishing trips and picnicking.

A 1907 Tribune editorial complained that: “In Winnipeg, the day has of late years degenerated into a day of sports which is far from the occasion of its birth and the powers that be would be within their proper sphere in insisting on its proper observance or else abolishing it as a public holiday altogether.”

Another problem with Arbor Day was that it fell at the start of a busy Canadian holiday season. There was Victoria Day later in May, the King’s birthday on June 3 and Dominion Day on July 1. Many retailers didn’t want to lose another day’s trade and chose to remain open. In 1911, Winnipeg’s school board announced that city schools would no longer close on Arbor Day due to the number of days being lost during the spring term.

It appeared that Manitoba’s Arbor Day holiday was on the ropes, waning in popularity and having strayed from its original intent. That is until a one paragraph notice in a Winnipeg newspaper breathed new life into it.

On May 2, 1914, the Tribune noted that a small number of cottage owners on Lake Winnipeg had chartered a Canadian Pacific Railway (CPR) train for May 4, Arbor Day Monday, to depart Winnipeg at 3:30 a.m. and return from Gimli starting at 6:00 p.m. Stops included Matlock, Whytewold, Winnipeg Beach and Sandy Hook.  The day trip was a chance to check on properties, clean up debris and get their gardens started before the first regular run of the cottage trains on June 2nd.

Based on the success of that charter, the CPR ran an Arbor Day Monday train of its own the following year.

The Canadian National Railway (CNR) followed suit in 1916 with train to Victoria Beach and Grand Beach. One newspaper reported that 300 people took advantage of that first Arbor Day service and that “gardening and house cleaning utensils completely filled one baggage car.”

The following year, the number of people on the CNR’s Arbor Day train more than tripled to 1,000. The Tribune declared: “More dirt and rubbish vanished from backyards at the beaches Monday (Arbor Day), it is estimated, than during all the next Mondays of the year put together”, adding that the hundreds of small rubbish fires in the area “cast a dim haze over the lake.”

By 1920, the Arbor Day trains were so popular that retailers got in on the act with Arbor Day sales on items like curtain fabric, house paint and gardening tools for cottagers to bring with them. In some resort towns there were real estate agents standing by on train platforms hoping to entice prospective cottage owners to make a purchase.

Arbor Day earned the nicknamed the “great cleanup” or the “great exodus” and disparaging newspaper columns and letters to the editor about the holiday all but disappeared.

A 1923 Tribune editorial marvelled at how quickly Arbor Day had deposed Victoria Day as the official start of cottage season: “It was a rare thing a few years ago to find many open cottages and resorts in May. It is different today. The season had been extended somehow or other by two weeks or more.”

The Manitoba government announced in April 1947 that while it would continue to proclaim Arbor Day as a “special day for planting trees and similar observances”, it would no longer be a public holiday.

The trains, however, kept running. In addition to the traditional Arbor Day Monday service, the railways added another train that left Winnipeg Saturday morning and returned on Sunday evening.

The CPR’s Arbor Day train to Gimli appears to have had its last run in 1949. Its trains were commandeered in early May 1950 for another type of mass exodus: bringing flood refugees from the Winnipeg region to the safety of the Interlake. The CNR’s Arbor Day train continued until 1953.

By this time, though, the influence of the train on cottage life had greatly diminished. The car was king and with better quality highways and all-season roads most cottage owners were free to start cottage season on their own schedule, not based on that of the railways.