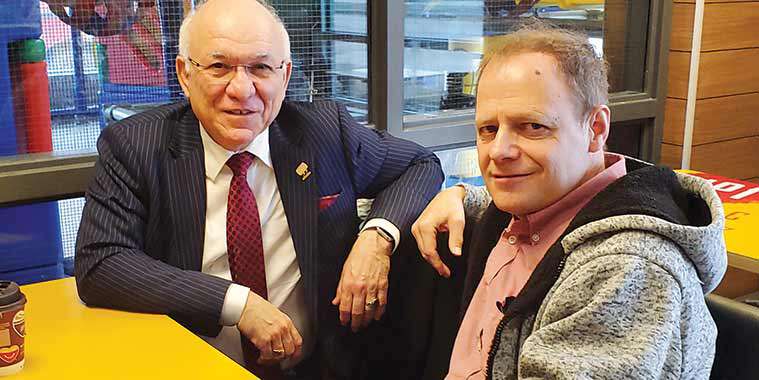 The unveiling of the federal 2019 budget in March revealed a striking coincidence.

In the new housing measures brought forward to address affordable home ownership, there were strong echos of a WinnipegREALTORS® petition that was drafted and signed by Winnipeggers back in 2016 — a petition that was strongly supported by Winnipeg North MP Kevin Lamoureux. Leading the charge behind that petition was local Realtor® Kourosh Doustshenas. He deserves full credit for first raising the idea of a petition with Lamoureux in a meeting they had then to discuss issues Realtors®  across the country feel are important to help Canadians attain their dream of home ownership.

“MP Kevin Lamoureux embraced my petition idea as he is a strong advocate of home ownership,” said Doustshenas. “In all honesty, it was not difficult getting public signatures once I explained what we were asking the federal government to do.”

Following is what was stated in the petition:

Whereas, since 1992, the Home Buyers’ Plan (HBP) has helped over 2.8 million Canadians achieve their dream of home ownership.

We, the undersigned citizens of Canada, call upon the House of Commons to consider indexing the HBP to preserve its purchasing power, and allow more Canadians to use it due to significant life changes.

As far back as 2016, the Canadian Real Estate Association (CREA) was advocating that the federal government and all MPs get behind indexing the long-standing Home Buyers’ Plan (HBP), which has enabled 2.8 million Canadians to access their RRSPs to use as a down payment towards their home purchase. The withdrawal ceiling per individual was $25,000. One exception to the rule of confining this plan to first-time buyers was for someone wanting to build or buy a home for a person with a disability who was related to them. They are required to pay back the amount withdrawn from their RRSPs within 15 years while paying back 1/15 each year.

Another CREA recommendation put forward in 2016 with respect to the HBP was helping home owners going through significant life changes. This would include Canadians dealing with matters such as job relocation to a more expensive housing market, the death of a spouse, a marital breakdown, or even someone trying to accommodate an elderly family member, all of which could result in the need to purchase a different home. All of these changing circumstances can affect one’s ability to maintain home ownership.

Lamoureux, in his own inimitable way, introduced and spoke in support of this petition in the House of Commons. This move was duly noted and appreciated by CREA. It is one thing to talk to an MP about an issue, but when that MP takes it upon himself to bring it forward to all MPs in the House of Commons, the issue is taken to a whole new level. This does not mean that other local MPs did not believe the recommendations had merit. Kildonan-St. Paul MP MaryAnn Mihychuk wrote a very supportive letter on her own accord to Finance Minister Bill Morneau about the same issue.

Jump forward three years to today. While the SNC Lavalin scandal has relegated the March federal budget to all but a footnote, the recommendations within the petition that Lamoureux first brought forward in the House of Commons have become an important part of what some media have now coined the “housing budget."

Indeed, this petition was realized twofold in the 2019 federal budget. First, the indexing of the HBP was jump-started in a major way by increasing the withdrawal limit from $25,000 to $35,000, thus allowing Canadians greater access to their RRSPs to purchase a home. Second — and this falls under the significant life changes recommendation — the use of the HBP was expanded to help Canadians maintain home ownership who are experiencing a marriage or common-law partnership split. Allowing and helping two parents accustomed to raising their children in a home to still keep and/or buy a home on their own — to, in part, create a better environment and situation for their children — has true value and meaning.

Both of these HBP changes are effective immediately.

A number of other housing measures were brought in as well. To a large extent, they are all  aimed at addressing housing affordability — something that has become a serious issue in housing markets where housing supply has not kept up with demand, therefore creating very expensive house prices. Fortunately for us, our local market conditions are more balanced, so there are many affordable housing options to choose from.

After the federal budget was presented, it was only fitting that Lamoureux be acknowledged for his part in bringing the home ownership petition to reality. As has been done on more than a few occasions over the last few years, Doustshenas went to visit the hard working MP at the McDonald’s restaurant on Keewatin where he meets constituents every Saturday.

Lamoureux was very humble and modest when praised for his effort. However, he is still appreciative of seeing the positive result in the federal budget. Not one to rest on his laurels, Lamoureux is already pivoting from those home buyers targeted in the federal budget, to seniors. He was pleased to share that he is working on facilitating targeted affordable seniors’ housing projects which in turn will free up homes in his riding for new home buyers.

You might say Lamoureux serves his constituents with the same dedication that McDonald’s serves its customers. And home buyers are just one of the beneficiaries of all he does as a hardworking MP.