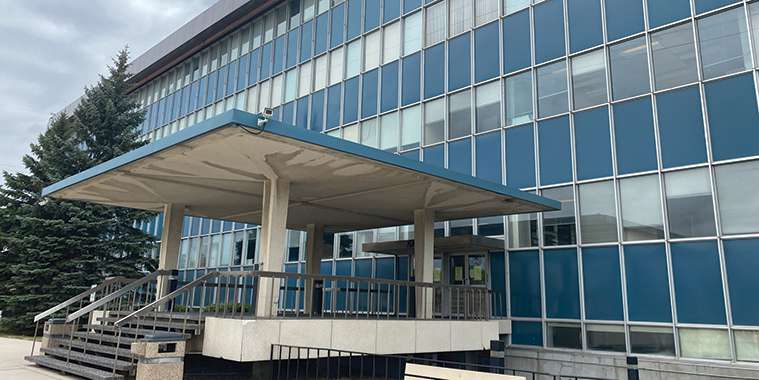 While the building is vacant from an office perspective, it continues to house infrastructure which is in the process of being relocated with a scheduled completion date in early 2023.

In addition to the IT process, part of the sale process also includes subdivision of the land. 820 Taylor Avenue is currently 20 acres of land. The portion of the site being offered for sale is 9.04 acres which includes almost 3,000 feet of frontage along Taylor Avenue and Harrow Street.

820 Taylor is ideally located in the heart of one of the most sought after residential and commercial nodes in Winnipeg. With River Heights and Fort Rouge to the North, Fort Garry and Linden Woods to the South and Tuxedo to the West, this site is surrounded by established single and multi-family neighborhoods. Its proximity to the rapid transit corridor expansion connecting downtown Winnipeg to the University of Manitoba.

Taylor Avenue itself is undergoing major improvement led by Grant Park Pavilions. This project is set to include over 1,000,000 square feet anchored by Winnipeg’s newest Walmart and Sobeys and will include 800+ multi-family units with the first phase of 124 units under construction now.

The building itself was built in 1957-1958. It was designed by Moody Moore Partners (“MMP Architects”) and built by Claydon Construction Limited. The original structure was 60,000 sf and was only 2 storeys high on the East wing and 3 storeys on the West. In 1966, MMP designed an expansion to the building to its current size with a fourth floor being added to the West wing and a third and fourth being added to the East.

The quality of the building’s original construction would allow for potential re-use of the facility of an office building, however, substantial re-investment would be required in order to meet current national and provincial building codes.

Despite the size of the building, the land itself is expected to drive the majority of the market value of the asset. The Southwest quadrant of the city of Winnipeg has become a major area of focus for multi-family development. The high-profile nature of this site along with the proximity to retail amenities, transit services and mature neighborhoods, all serve to make 820 Taylor an ideal multi-family and mixed-use development site.

A rezoning of the site to CMU would allow a developer to add almost 500 units of multi-family to this site with excellent means of ingress and egress. CMU zoning stands for Commercial Mixed Use and is a zoning that is intended to allow for more dense levels of development than are allowed in neighborhood locations. It is intended to be applied along regional mixed-use corridors such as Taylor Avenue to provide services to an area.

Capital Commercial was awarded this sale listing through a competitive process and has officially begun its marketing of the property. Offers are to be considered after October 4, 2021.

Trevor Clay was the past Commercial Division Committee Chair at the Winnipeg Regional Real Estate Board.