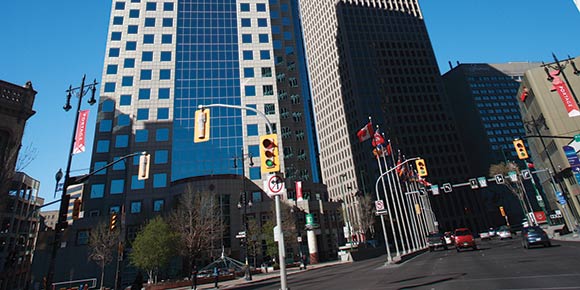 The opening of the first new office tower in nearly three decades will cause the biggest ripple through Winnipeg’s commercial real estate sector in 2019.

The 17-storey, 300,000-square-foot office tower at True North Square — one of four buildings rising out of the ground in downtown Winnipeg as part of a $400-million project — has already welcomed its first tenant, law firm Thompson Dorfman Sweatman. Its biggest impact, however, won’t be felt until it throws open the doors to its “AAA” space to virtually all of its tenants in June.

“It’s going to cause a waterfall effect,” said Kyra Winfield, a senior associate at Avison Young in Winnipeg and incoming Commercial Division chair.

TDS moved into the top three floors last summer. Other tenants already committed include accounting firm MNP and Scotiabank. When completed in a couple of years, True North Square will boast retail shops, offices, condominiums and a full-service hotel.

Many of the tenants are relocating from one of the three towers at Portage and Main but as 201 Portage, 360 Main and the Richardson Building fill the soon-to-be abandoned spaces, other Class A and Class B space nearby will open up.

“We’re not a market where there are a lot of firms coming in from out of town,” she said.

Winfield doesn’t believe Class C space will feel much of an impact as many of the businesses in that space are located in the Exchange District and prefer the look and feel of working in heritage buildings.

Trevor Clay, a principal at Capital Commercial Real Estate in Winnipeg, agrees and said True North Square is causing a “flight to quality.”

Some other under-used buildings, such as the Medical Arts Building, are being repurposed with multi-family apartments going in on the upper floors.

“Buildings that are experiencing vacancy issues and are having difficulty attracting tenants could be more valuable as multi-use buildings,” he said.

201 Portage is going to be hardest hit by the retail musical chairs but Clay said the 33-storey tower won’t have too much difficulty finding new tenants because of its location and the recent investments it made in the food court and other amenities.

“It’s got great parking, too. That building will fill back up. It’s just a matter of time,” he said. “With the excitement in the downtown right now, you could see some suburban tenants taking a look at downtown. It’s a more attractive place to live, work and do business,” he said.

The big news on the retail side in 2018 was cannabis stores springing up like weeds once the drug became legal in the fall. Many tenants signed on for above-market rents because competition for many spaces was high and landlords were hesitant about the sector.

Winfield said it’s unlikely lightning will strike two years in a row but she believes landlords in 2019 will be creative in order to bring on more tenants, particularly in bigger spaces. Shindico Realty is on the cutting edge in this regard, renovating the former Target location near CF Polo Park to accommodate a 24-7 Intouch call centre, Winners and HomeSense.

This isn’t a Winnipeg phenomenon and Clay said creative repurposing of space is happening across North America in the wake of the bankruptcies of a number of big box retailers, such as Sears.

“The traditional big-box retail users aren’t taking space as they did five years ago. The face of retail is changing. The demand is still here, I don’t think we’re overbuilt,” he said, noting quick service restaurants and fitness facilities are filling much of the empty space at malls across town.

The retailers that think outside the box and offer a better customer experience will be the ones to excel, Winfield said.

“There’s a resurgence in smaller retailers. People really value an omni-channel experience and being able to look at a product on your phone and then drive to the store and buy it. There’s also click and collect groceries. Retailers have to be more flexible and adaptable to what consumers want,” she said.

CentrePort Canada is driving Winnipeg’s industrial market. It recently announced a pair of 10-figure investments by Freightliner Manitoba and Canada West Limited at the inland port and free trade zone located adjacent to the James Richardson International Airport and into the RM of Rosser. The moves have prompted some industry players to claim this is the best the industrial side has been in 40 or 50 years.

“Centreport brought a lot of land to market and it sold very quickly,” Winfield said.