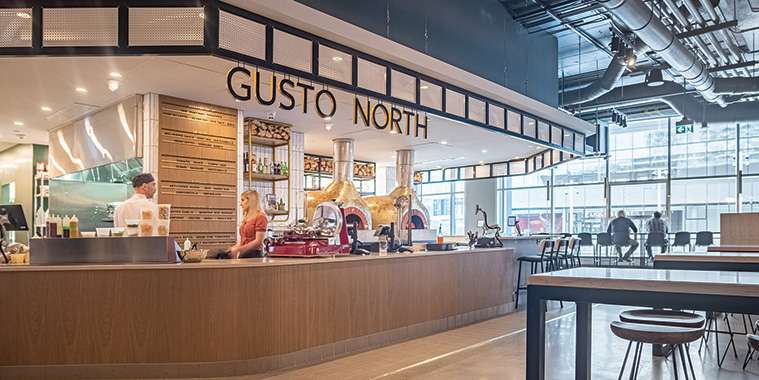 This is not your father’s food court

You will not find anything resembling the newly-minted Hargrave Street Market at CF Polo Park, the University of Manitoba or any other public place in Winnipeg where you might like to grab a bite to eat or a pint to drink.

For starters, there isn’t a single Subway, Pizza Hut or Burger King location to be found. In fact, if you’re from out of town, you won’t recognize a single banner around the 16,000-square-foot space. And that’s completely on purpose, according to Jim Ludlow, president of True North Real Estate, because the food hall concept is to showcase the best-of-the-best from the local restaurant and chef worlds.

“We want to give them an environment to showcase what they do in other parts of the city. Bringing local flavour is something that people identify with,” he said.Those Winnipeg-based establishments include Pizzeria Gusto, Lake of the Woods Brewing Co., Yard Burger, the Good Fight Taco, Saburo Kitchen, Fools & Horses Coffee Co., Rose Bar and Miss Brown’s Brunch Cafe.

When Bobby Mottola, owner and president of Pizzeria Gusto, a popular River Heights eatery, was offered a chance to get in on the action when the project was in its infancy, he couldn’t sign off fast enough when he heard the families backing it were named Richardson, Thomson and Chipman. So, he was invited to go on market research trips to Los Angeles, New York, Vancouver, Toronto and Montreal to see how food halls were operating in some of North America’s biggest markets.

“We took the best of the best. We shrunk it down in some cases and expanded some others,” he said.

The fact that the food hall was going to feature nothing but local food and drink was a crucial element for Mottola, who often serves as the chief of first impressions by greeting customers at the top of the escalator with a handshake, a hug or a kiss on the cheek. Or sometimes all three.

“If you threw in a Starbucks, all of a sudden, it ceases to be a destination because (the offering) is diluted a little bit.”

Ludlow said the food hall, which is located on the second floor of 242 Hargrave Street, a.k.a. Scotiabank Tower, the city’s newest office building, is part of a bigger strategy that includes the Winnipeg Jets, conventions, office space, residential buildings and a grocery store. The 17-storey tower became the first of what will ultimately be five towers at True North Square when it welcomed its first tenant more than 18 months ago.

“The purpose of True North Square is to create a new district. It’s got a spectrum from grocery, a microbrewery and banking to living, hockey and entertainment,” he said. The entire complex is also in the Winnipeg transit mall and includes bike storage and washing.

“We have the full live, work and play concept in mixed use (buildings) on what used to be surface parking,” he said.

A grocery store has been the most talked-about missing piece of the downtown puzzle for many years but Mottola Grocery won’t be channeling its inner Real Canadian Superstore with its ground floor location. Instead, the 6,500-square-foot ground floor space, which is scheduled to open by the spring, will compliment the offering upstairs on the second floor.

“We get the best tomatoes, produce and proteins at our restaurants. We’re taking those ingredients and putting them in a retail environment. It allows us to sell them individually or to build suppers and lunches at different stages. If you came to Gusto and liked the scallops, we can walk you through how to put them together,” Mottola said.“The grocery store is a hybrid. You can’t walk in and find nine different kinds of paper towels.”

The food hall is going to have a significantly bigger built-in market in a few years when three more towers — a Sutton Place hotel, a Sutton Place condo building and the 21-storey home to Wawanesa Insurance — rise up out of the ground to become part of the True North Square
family. The second tower, a 24-storey apartment and
commercial building, opened last year.