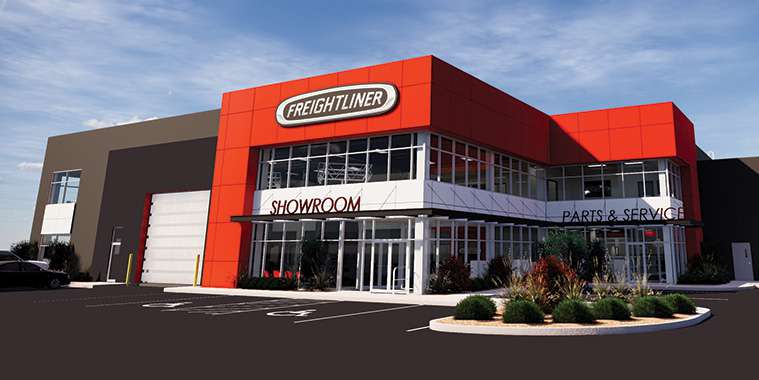 The president of Freightliner Manitoba knows his 180 employees are tired of sharing both offices and parking spaces at 2058 Logan Avenue and bumping elbows with each other in the lunch room and hallways.

“My staff deserves a nicer place to come to work. The old building is tired, it’s too crowded and everybody is sitting on top of each other. My staff needs more space to do a good job for people,” he said.

Freightliner, a local provider of service, sales and support to the trucking industry, is waiting patiently for its new 78,000-square-foot home on more than 13 acres in Brookside Industrial Park Phase III at CentrePort Canada to be completed. Talbot said the need is particularly acute because his company is the No. 1 retail truck provider in the province working out of the No. 7 facility.

“The roofs are on, a lot of the siding is done, insulation is being put in and plumbing, heating, air conditioning and electrical is all going in as we speak. We’re on budget and on time. We keep writing cheques and (the builders) keep building it,” he said.

The plan is to move from their current home, which is just 36,000 square feet, at the end of January 2020. Shortly after, he expects to start hiring everything from mechanics and parts people to administrative staff to salespeople.

“We’ll be pushing 200 employees within six months,” he said.

Freightliner actually outgrew its Logan facility “10 or 15 years ago” but Talbot couldn’t find the right land on which to build.

There is virtually no shortage of land at CentrePort, a 20,000-acre inland port and free trade zone located adjacent to the James Richardson International Airport and into the RM of Rosser.

Diane Gray, its president and CEO, said Freightliner’s more than $18-million project is a big vote of confidence in CentrePort.

“(Freightliner’s) investment in the marketplace shows the importance of transportation and logistics to our economy,” she said.

Talbot and his employees are going to have plenty of neighbours as the nearly 100 acres of Phase III sold out in about seven months. They include the National Research Council’s $60-million advanced manufacturing facility, a 100,000-square-foot distribution centre for Groupe Touchette, a Canadian-owned tire distributor, and Canada West Limited, a privately-owned real estate investment group headquartered in Edmonton. Canada West has started construction on what will be eight buildings encompassing 350,000 square feet for industrial tenants.

“That’s pretty exciting for Winnipeg. We haven’t seen a lot of that happening,” she said.

Talbot is quick to add that Freightliner’s customers will also benefit from the new space. He wasn’t going to approve a project this big without creating a superior customer service environment.

“We’re not going to build a new building and be the same. It will be more user-friendly and things will flow better because of the design and the space,” he said.

The availability of land at CentrePort made the relocation decision easy for Talbot as he wanted to be close to the people who support Freightliner. The company has a strong philanthropic credo where employees are encouraged to donate time and money to a number of causes that focus on people less fortunate than them, such as Siloam Mission and  CancerCare Manitoba.

For example, each winter the staff organizes “Fill the Freightliner” at a local Boston Pizza location, where people come by to drop off food, clothing and money for Siloam Mission.

“We have school programs, we support the Salvation Army at Christmas and we have barbecues all summer long. The dealership matches all the money raised. We sponsors families at Christmas and we’ve built five houses with Habitat For Humanity. We’re all over,” he said.