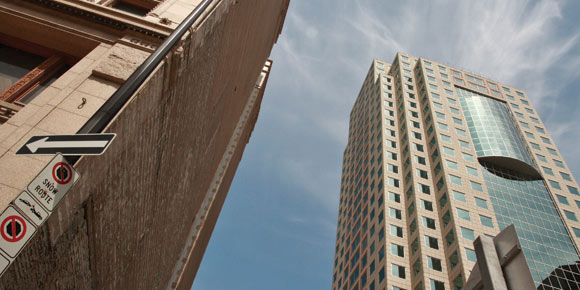 New investors focusing on Winnipeg for its diverse economy

Winnipeg just might be the best city in Canada for investment opportunities in commercial real estate.

The Manitoba capital doesn’t have the gross investment numbers that Vancouver and Toronto do but with every asset class firing on all cylinders, it’s in a “very good spot,” according to Trevor Clay, chair of the WinnipegREALTORS® Commercial Division Executive Council.

In fact, the entire Canadian commercial real estate market set another record with more than $43.1 billion in investment last year, according to a recent report from CBRE Ltd. That’s up from $34.7 billion in 2016 and the company believes another record will be set this year. Winnipeg is set to do its part.

“If you want to place money in commercial real estate in Western Canada, Vancouver is extremely expensive, Alberta is unbalanced and Saskatchewan is a smaller market with issues in the energy sector. Winnipeg, with its diverse economy, has made a market that a lot of new investors are focusing on and they’re trying to buy properties here,” Clay said.

Slow and steady wins the race

According to a recent report by Colliers International, Winnipeg’s office market had a vacancy rate of 8.07 per cent at the end of 2017, the lowest it had been in three years. The decrease of 1.14 per cent over the last half of the year was a result of positive absorption in both Class B and Class C buildings. Toronto and Vancouver, meanwhile, had the lowest downtown office vacancies in North America at 3.7 per cent and 5.0 per cent, respectively.

“Investors see rents are going up at a steady pace (in Winnipeg). It’s predictable. There are barriers to entry, such as the high costs of construction and a lack of available serviced land for development. Existing buildings are doing quite well in occupancy and rent growth,” he said.

A safe and predictable haven

Winnipeg has long been known for its diversity and lack of dependence on any one sector, characteristics that are proving very valuable today.

“The value proposition that we have in Winnipeg, that’s how most investors see Winnipeg. They don’t expect a boom or a jump in value. They expect rents to be steady and increase steadily. Predictability is very important to any investor. Real estate is typically a long-term investment. Whether you’re a private investor or a pension fund, most active investors are looking to make commitments to these assets. Stability is the No. 1 reason why Winnipeg is becoming a more and more attractive place to invest,” Clay said.

A flight to quality

Just how the growth of online shopping is going to impact the retail sector remains to be seen but the hope is that the loss of Sears last year will be offset by a number of smaller players moving into those now-vacant spaces. “The best locations that are well-anchored by grocery stores and pharmacies are succeeding. They’re willing to pay strong rents for a high-quality product,” Clay said.

Storm clouds on the horizon?

Rising interest rates are being watched by all real estate players as they have an impact on investor returns.

“We’re waiting to see how high and how fast they go,” Clay said. The pending opening of True North Square is already having an impact at Portage and Main as a number of high-profile tenants, such as law firm Thompson, Dorfman, Sweatman LLP, in the three towers at Winnipeg’s most famous intersection have announced their intentions to relocate to the new tower, which is scheduled to open in June.

“There will likely be a few more,” he said. “That’s something office landlords are concerned about.”