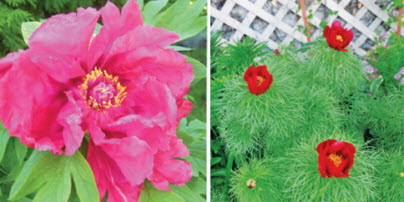 Trials and tribulations of growing tree and fern peonies

When I first started gardening in earnest, one of my early purchases was a tree peony. I bought it from a small garden centre on Roblin Boulevard  run by a family who were enterprising, if not expert, gardeners. Many people will remember RBM gardens. It was definitely a down-home operation, with the flowers growing in old turkey sheds and only a big poster on a wooden wall to tell you what was what.

I was in awe among the flats of bedding plants, happily growing on gravel beds beside a weed or two — it was that kind of place. All would be serenaded by a host of honeybees busily reaping this unexpected harvest of exotic pollen.

The tree peony was a big plant in a 10-inch black pot. It carried a price tag of $14.95, at the time, an astronomical charge for a flower. But I had to have it after I saw its silky red blooms and bright yellow stamens on the poster. I dreamed of how it would shine in the garden and how it would stop passersby with its beauty.

Belle didn’t have much advice to give me about its care or where to plant it, as she wasn’t really much of a gardener, she told me, but she did hunt up a pamphlet to go with my purchase and the deal was struck.

I read that pamphlet very carefully. I learned that this wonderful plant was from China, where it would grow to about six feet tall and wide.

“Plant in a north facing location six feet in front of some evergreens,” said the text, so I did just that, figuring there must be some magic connection. I now understand that such a location keeps the plant well snow covered and out of the sun where it could be damaged by the thaw and freeze cycle. We dug a deep and wide hole (my husband, Glenn, loved to dig deep) and filled the hole with fresh soil and peat moss. Then we tenderly lay in the root ball, watered and waited.

In the spring, some woody twigs would be left and gradually fresh sprouts of pea green would appear. The leaves were attractive, almost maple shaped, and although the plant never got bigger than about three-by-three feet, it had a nice shape, so we left it alone and forgot about it.

Then, one spring, the miracle happened. It bloomed! And it bloomed! It was covered in huge, silky red blossoms with stunning, eye-popping yellow centres. Glenn and I were completely smitten.

That fall, he built a fence around the tree peony and I covered its root crown with peat moss. Then we waited. And we waited. Nothing, the next spring.

We have learned over the years that our tree peony blooms when it wants to, sometimes three years in a row, sometimes not at all. I may or may not see it bloom this year, but I hope so thanks to the deep snow cover, but you never know after the late frost following an early thaw this spring.

It should let me know any day now with fat and pointed buds full of promise.

More reliable are the fern peonies, now covering a goodly patch in the sunny south-facing border by the house. They are usually among the first plants to flower and they are currently bursting with possibility.

Although they cost in the neighbourhood of $60 each, the investment pays off as they have stoloniferous roots that spread and one plant soon turns into a whole swathe. They take no special care — just some healthy soil and a sunny spot.

Just showing their tender pink shoots are the herbaceous peonies, once touted to be Winnipeg’s official flower. They live up to 90 years undisturbed and are tough as nails, easily managing the coldest winters.

Don’t plant them too deep. Their eyes should be no more than half an inch under the surface or they will stubbornly refuse to bloom. And don’t expect flowers the second year, since some will sulk after transplanting or dividing, but they will reward your patience eventually.